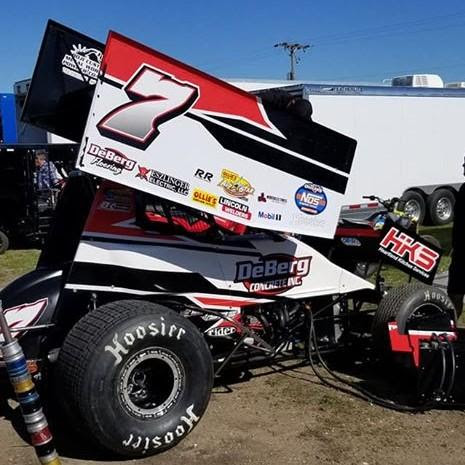 Henderson also picked up a 12th-place finish on Saturday night to cap off the most successful weekend of the season for the Tea, S.D., native.

"Honestly, after the first set of hot laps on Friday I didn't feel great at all, but we decided not to change anything and it really paid off," he said. "The car had a lot of speed and I felt like we showed what we are capable of against a really talented field of drivers. To lead laps and be in contention is all you can ask for and I'm extremely pleased with how we did."

Henderson kicked off Friday night's opener by laying down a lap of 13.457 seconds in time trials. That was good enough for 16th quickest among the 43 cars in attendance, but the quickest in his group. As a result, Henderson lined up in the fourth position in a heat race. He advanced to third and earned a spot in a dash.

Henderson drew the No. 1 for the dash, placing him on the pole. He led all four laps to earn the pole position for the night's feature event.

Henderson jumped out to an early lead and led the first seven laps of the feature before giving way in traffic and falling to second. He continued to struggle in traffic and fell back as far as fourth before capitalizing on a late restart to move back into the third position, securing his spot on the podium for the first time of the year.

"We caught the tail end of the field there and you have a split second to decide where to go and I just chose wrong," he said. "I didn't really protect the bottom like I needed to and it allowed those guys to get by us. Once we got back to the bottom I felt like we were as good as any car on the track, but that's just the way it goes sometimes."

Henderson enjoyed another fast race car on Saturday as he laid down a lap of 13.258 seconds in time trials, good enough for seventh quickest overall and once again quickest in his group. He then advanced from fourth to second in a heat race to make a dash. This time the draw was not as favorable as he drew a No. 6, placing him in the final starting spot in his dash. He ended in that position to line up 12th in the main event.

Henderson struggled to make up ground on a slippery track surface during the A Main. He ran between 11th and 14th before settling into the 12th position.

"When you are back in the middle of the pack, you really need to make your moves quickly to be able to get your speed up and really be fast," he said. "We were not bad, but it was just tough to really gain track position. I didn't get the jump I really needed and after that we were just kind of maintaining and not moving forward."

Henderson will return to Knoxville Raceway in Knoxville, Iowa, this Saturday for the first weekly program of the season. Once again planning to be regulars at the famed race track, Henderson believes the Sandvig program is ready to take a step forward from the consistency they had last year to find Victory Lane in 2020.

"We had a pretty good season last year at Knoxville and I have no doubt the wins are coming," he said. "Coming from running so well at a track like Park Jefferson that we rarely go to and going into a track we are really familiar with, I feel great about where we sit and I'm excited about the prospects of the season ahead."

"Mike and Justin are kind of a low budget team and I always enjoy being a part of the underdog mentality," Plough said. "They kind of remind me of myself and I'm happy to help take them over the hump with our support."