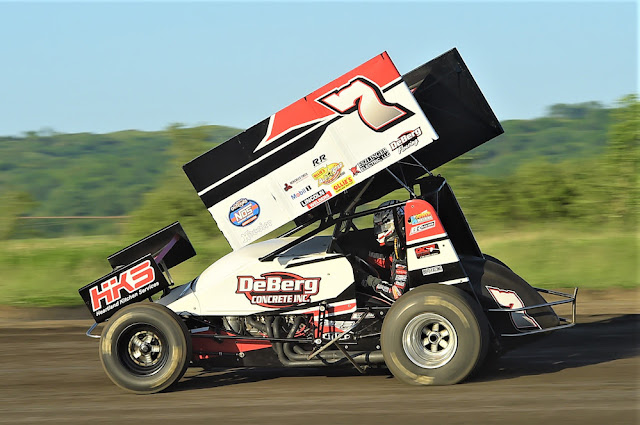 Henderson highlighted the Brownells Big Guns Bash doubleheader with a 17 th-place finish on Saturday after he finished in the Last Chance Showdown on Friday against a field of 50-plus drivers.


"It was really a tale of two nights as we struggled with something mechanical on Night 1 and never really got going," he said. "But on Saturday we had the car going really well. We're not far off from where we want to be."

Friday night began in time trials as Henderson laid down a lap of 15.727 seconds - good enough for 19th in his group. This earned him the 10th starting spot in a heat race. He advanced one position to finish ninth before capping the night by placing 10th in the Last Chance Showdown.

"We had some issues with the car and we were unaware of what it was until afterwards," he said. "It was a bummer. We tried just about everything and we couldn't get it figured out. But those nights happen and we got her fixed up and ready for Saturday."

Looking for redemption during the Saturday night finale, Henderson showed improvement as he laid down a lap of 15.960 seconds in time trials - good enough for seventh fastest in his group. He then finished where he started in a heat race - fourth - to lock himself directly into the 14th starting spot in the A Main.

Henderson was on the move early and he advanced as high as 10th place. However, after a late caution the car struggled in terms of handling and dropped to 17th. The top 20 was Henderson's fourth in seven races this season.

"We were running second in the heat and that would've put us in a really good position for the feature and we dropped two spots there late, which hurt our feature starting spot," he said. "But we were actually really good in the feature and were moving forward and the car just went away after that last caution. I think maybe the tires sealed over, but we had a better car than the results suggest."

Henderson and Sandvig will remain at Knoxville Raceway this Saturday as the track runs its second weekly program of the 2020 season. He will also compete on Friday night in 360ci sprint car competition in his own car at Jackson Motorplex in Jackson, Minn.

"Mike and I worked together to make our cars identical so any time I can get seat time it's benefiting what we do together," Henderson said. "We've had some really promising moments together this year and some disappointing ones as well. However, I think we're well on our way to ripping off great runs and we'll be in contention this weekend."

Boji Custom Metal Works, which is based in Milford, Iowa, manufactures custom aluminum trailers as well as custom building stainless and aluminum products. For more information, visit https://www.facebook.com/BojiCustomMetalWorks or call (712) 330-1535

"We're happy to have Boji Custom Metal Works on board as a sponsor for 2020," team owner Mike Sandvig said. "They do great work and provide a fast service. I'd recommend them to anybody who asks."