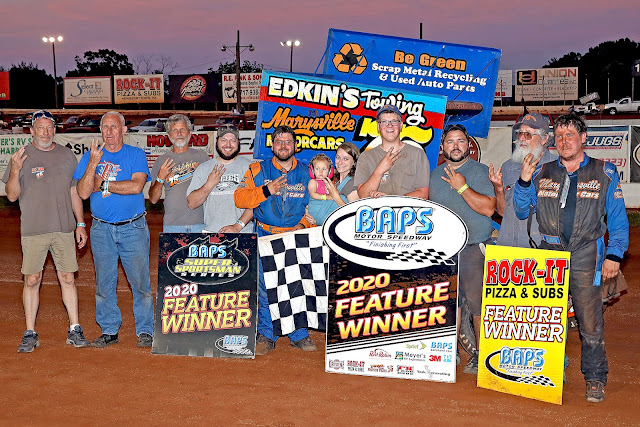 YORK HAVEN, Pa.: It looked like Kenny Edkin was going to get beat for the first time this season at BAPS Motor Speedway.

The deck was stacked against him. Still, after starting 17th on the grid, getting up to second, slipping back to third, and looking like he was out of it, Edkin got one more chance with a caution on the last lap.

And he didn’t disappoint.

Edkin took advantage of the last-lap restart and ducked inside both Mitten and Gutshall off of the second corner and led the final half lap to claim the 25-Lap Super Sportsman feature. It was his third straight win to start the season.

“I pretty much figured I was going to run third there once Russell got away from me,” Edkin said. “I was just getting really free on the long runs. We got that caution, and I was like, ‘We got a shot at this.’

“It was kind of déjà vu for us. It was the same as last week. Russell forced Chase up the track, and it left the door open, and you can’t do that with me. I figured they were going to fly each other. Chase kind of threw me a dirty slider [earlier] and about stuffed me in the fence, so I was sticking to the bottom.”

Tyler Wolford led the first lap before Gutshall, who started second on the grid, took over the top spot on the second circuit. He opened up a big lead, only to have it erased on Lap 5 when Dave Hollar and Daniel John came to rest.

Edkin, who lined up in Row 9 was in the top 10 by the time the first caution flew. A couple of laps later, he was running in the top five.

Scott Dellinger made his way into second, but he couldn’t hold back Edkin. After the defending track champion took second, he went after Gutshall, only to get pushed up the track as the two leaders traded slide jobs.

Mitten, who tagged the rear after a first-lap incident, surged through the field and blew by Edkin. He chased down Gutshall but slipped back a bit thanks to some lapped traffic that didn’t go his way.

Gutshall appeared to have a lock on the win until Timmie Barrick rolled to a stop. That set up a one-lap dash to the finish that seemed fitting in what turned out to be an entertaining race.

Mitten was able to get inside Gutshall heading into Turn 1. He slid up and pinched Gutshall, leaving little to no room in Turn 2. It allowed Edkin to nail the bottom in the second corner and drive past for the winning move.

“I’m thinking Victory Lane all of the time,” said Edkin when asked about starting 17th. “We don’t come here to run second.

“Tuesday night is our shop night, and I got to the shop around 4:30, and they had everything done. This wouldn’t be possible without Doug, Adam, Don, Paul, my dad, my brother ... these guys keep putting this on the track every week for me. It’s a pleasure to drive.”

Mitten finished second, with Dellinger, Bill Brian Jr., and Matt Ondek completing the top five. Gutshall got out of shape along the Turn 2 fence but regained control to finish seventh in the running order.

Luke Deatrick, Jay Fannasy, and Mitten were heat winners for the 21-car field. There were five cautions in the main event.

Doug Hammaker executed a bold move through Turns 1 and 2 at the start of the 358 Sprint Car feature and sped away to victory in the 20-Lap affair.

Russell Hammaker and Scott Fisher lined up on the front row but a false start brought back start. On the second attempt, Doug Hammaker ripped the top and shot around the front row to take the lead.

Once out front, Doug Hammaker was in a race of his own. He built a 6.7-second lead by the halfway point and drove away to the easy win.