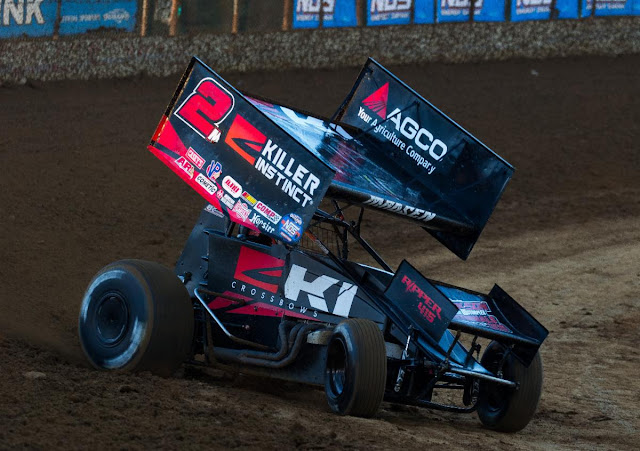 Madsen guided the Killer Instinct Crossbows backed Big Game Motorsports sprint car to a sixth-place outing during the finale of the tripleheader, marking his top run on the final night of the event since placing second three years ago.


"I'm a little disappointed because the team is getting real strong," he said. "The car was good every time it hit the track. I felt like overall we were better than sixth place, but it was still a good run."

"We drew a late pill Thursday night and qualified well," he said. "With the format they did an invert of six for the heat races. We got a bad heat and didn't get a good start. We didn't make the transfer and had to run the Last Chance Showdown."

Rain postponed the second half of the show to Friday evening. Madsen placed second in the consolation race to transfer into the back of the main event. He then rallied from 22nd to 12th to garner the Hard Charger Award for passing the most cars.

"It was an overall points system so it was all about getting points," he said. "We did a good job of getting what we could."

Madsen timed in fourth quickest before he maneuvered from sixth to fourth place in a heat race to start Friday's program. That lined him up on the outside of the eighth row for the main event.

"We qualified well and got through the heat," he said. "We were coming on strong in the feature and were really, really good. I think I was running ninth or 10th. I was trying to pass someone and should have been more patient. I crashed and it broke a drag link. We had to go to the work area. We came back out and got a few spots, but we left some points on the table there."

Madsen battled back to place 19th.

He then finished where he started - second - in a qualifier to kick off Saturday's finale.

"We nearly got Parker Price-Miller to win the qualifier, which would have got us in the dash," he said. "That still put us starting ninth in the feature. We got a great start and were running fifth the majority of the race. Then I got a bad restart and lost two spots. We got one back and ended sixth. We had a really strong race car."

Next up for the team is a trip to Cedar Lake Speedway in New Richmond, Wis., this Thursday through Saturday for the Independence Day Shootout with the World of Outlaws.