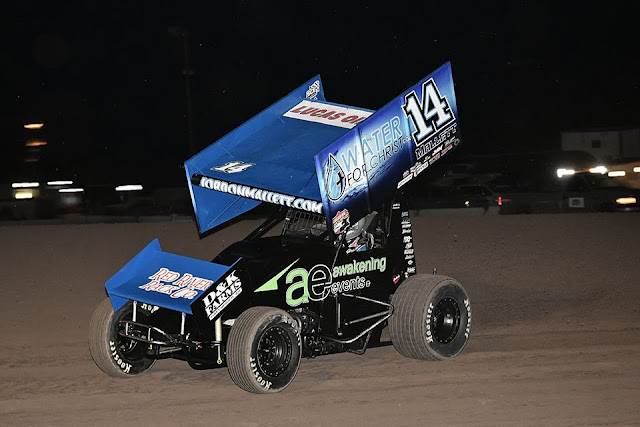 Dating back to the first three races two weeks ago, Mallett was the only driver to finish on the podium in each of the six races. He was also the hard charger during the Speedweek finale on Saturday at Jackson Motor Speedway.


"We were not really planning on running the whole deal, but after the first three races we saw we were up front and my wife really pushed me to try and win the thing," he said. "The plan was just to try and further tune these new Triple X chassis and build a notebook. We did that and then some by winning the championship."

Entering Speedweek Round 4 on Thursday at North Alabama Speedweek in Tuscumbia, Ala., with a 24-point advantage in the standings, Mallett began the night by placing fifth in the dash before winning a heat race from the pole position.

Mallett lined up for the feature on the inside of the third row and he quickly moved into fourth on the initial start. After settling into the third position, Mallett tracked down the leaders in traffic before a caution came out with five laps to go. The clean air allowed the leaders to pull away and Mallett settled for a third-place finish.

"We were pretty good, but we just needed to be in a better position for the feature," he said. "Some of these races it's so important to get on the front row at the start and ultimately the track was just tough to really do too much on."

Mallett headed to Hattiesburg Speedway in Hattiesburg, Miss., the following night. He placed fourth in the dash and third in a heat race. For the second consecutive night Mallett lined up fifth in the A Main and he struggled on the initial start, dropping to seventh. Following another late-race caution, Mallett utilized the bottom of the track to advance to third.

"I wasn't really where I wanted to be early in the night and it took us a little while to get to where I felt good," he said. "You really have to take every opportunity you get to pass cars on these tracks and we just were not quite as good as the leaders."

Mallett traveled 85 miles north to the Jackson Motor Speedway on Saturday. He finished fourth in both the dash and a heat race.

Mallett started 11th in the feature and knowing he could wrap up a championship with a solid effort, he planned to be cautious with his approach. Using an extremely fast race car, Mallett quickly diced his way up to third place and once there he decided not to push the envelope to secure the title.

"It really started to creep into my mind that we could wrap up the title if we ran well on the last night, so that was definitely in the back of my mind all night," he said. "I was going back and forth on if I should push it and go for the win or just stay steady in third. My mind said go and the car said go, but ultimately I wanted the title and I didn't want to cost myself it trying to get a win. It was just really a bittersweet night as in different circumstances we might win the race."

Mallett will take this weekend off to prepare for the return of the Lucas Oil ASCS National Tour the following week. In its first races since March due to the effects of COVID-19, the series will head to Caney Valley Speedway in Caney, Kan., on June 25 and to I-30 Speedway in Little Rock, Ark. on June 27.

"I'm looking forward to a return to ASCS racing and I feel like we've used the time off wisely to kind of fine-tune our program," he said. "We knew coming into this season that it would take some time to learn how the Triple X chassis would run and in a way, this was a blessing as we've got ourselves dialed in without sacrificing points on the tour."

"Red River Rack Company has been family friends for years and we are pleased to have them on board for another season," Mallett said.