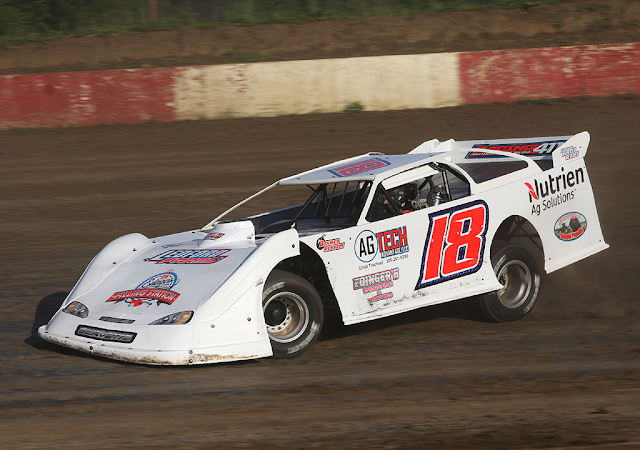 CONCORD, NC – June 23, 2020 – Many of Illinois’ greatest dirt track racers began their journey to national success by cutting their teeth at the down-and-dirty bullrings spotted throughout the state. This year, 21-year-old Jeffrey Ledford takes the next step in his own journey to a bright future in dirt motorsports. And there’s no denying his passion for racing.

“If I could race Late Models for a living the rest of my life, I’d be the happiest man on Earth,” he says.

A former regular of the DIRTcar UMP Modified ranks around his home tracks of Fairbury Speedway and Farmer City Raceway, Ledford, of Pontiac, IL, said the stars were all aligned for the switch to a full-size DIRTcar Late Model for the 2020 season. He acquired a 2017 Rocket XR1 Chassis over the winter and a new Mullins Race Engines LS7 to go with it. Before long, it was time to hit the track.

After a testing session at Farmer City, Ledford and his crew made the trip out to Federated Auto Parts Raceway at I-55 for the Karl’s Chevrolet 50 on May 9 – his first race in the car against the best-of-the-best DIRTcar Late Model drivers in the region. He finished the night one spot shy of a transfer into the Feature event, but said he learned a lot in his first visit to the high banks of one of Missouri’s most historic ovals.

“With every lap that I ran, I just got a little more comfortable, just getting a feel for it,” Ledford said. “It takes a lot of confidence to drive these cars the way they need to be driven.”

Back on June 6, Ledford came from 14th to finish 7th in his second time out in the car at I-55 – a big improvement that displayed a knack for quickly adapting to new cars and new racetracks.

Ledford’s talent behind the wheel started from his primitive days of wheeling go-karts at six years old. His father Jay, a DIRTcar UMP Modified driver himself, helped to put Jeffrey in a UMP Modified of his own back in 2013 at just 14 years of age. Since then, Jeffrey’s seen plenty of success on the track, totaling 15 Feature wins including the Modified portion of the 2017 Farmer City 74 to compliment the track championship trophy he hoisted that same season.

Hundreds of laps around the lightning-fast quarter-mile bullrings of Farmer City and Fairbury in the Modified have spawned a thick notebook for Ledford on how to wheel it in a Late Model as well. Competing weekly against Illinois top-guns like Ryan Unzicker, Mike Spatola, Jason Feger and Allen Weisser – he’s going to need it.

“The tracks around here, especially Fairbury and Farmer City, they never seem to completely slick-off and seal-over. There’s always some traction in places that might be tough to find, but you’ve always got to keep an eye out for it. Usually, that could be right around the infield tires or right up against the wall,” Ledford said.

Racing in the Ledford family goes even further than Jeffrey and Jay’s efforts; younger brother Mikey is digging into his second season at the controls of his UMP Modified as well. All three racers drove Modifieds built by Mark Bush Racing, whom Jeffrey said was instrumental in getting a winning combination for his Modified and jumpstarting his Late Model venture by hooking the team up with the folks at Rocket Chassis.

“Those guys over at Rocket Chassis, they do a great job,” Ledford said. “We race Mark Bush Racing Modifieds, and in getting to know Mark, he introduced us to Mark Richards. We’re just familiar with those guys and they’re super helpful over there.”

A current student of mechanical engineering at Bradley University in Peoria, Ledford said he also has hopes of one day dipping into racing chassis fabrication and design of his own.

“Even if I can’t find a way to race full-time behind the wheel, I’d like to, one day, build my own cars and have my own chassis-building business. Try to use my mechanical engineering skills to make that work,” he said.

But for now, this young hot shoe is focused on getting more familiar with his new 800-HP chariot. He’s always looked up to the big Illinois Late Model names, but none more than his biggest inspiration, Shannon Babb. Ledford even runs the same car number as the four-time DIRTcar Summer Nationals champion – #18.

“I’ve always liked the way [Babb] races other people. He’s got that mentality where if you show him respect, he’ll show you respect back. That’s the way I like to approach it too. Plus, he’s just a hell of a racecar driver,” Ledford said.