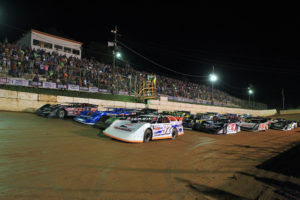 The name itself immediately steals your attention. The 32-degree banked, 4/10th-mile surface spikes your interest. Once you actually see the racing that Volunteer Speedway provides, it’s game over; you’re hooked.

On Friday and Saturday, June 19-20, a packed house will converge on the Tennessee facility as the World of Outlaws Morton Buildings Late Model Series writes the next chapter at “The World’s Fastest Dirt Track.” Fans can buy tickets HERE, drivers can register to race HERE, teams can view the competitor notes HERE, and you can read up on the rest of the information you should know RIGHT HERE.

Volunteer Speedway has hosted 17 national touring events since 2004, when the World of Outlaws unveiled the “Dirty Dozen” and kickstarted a new era of Dirt Late Model Racing. In that time, fans have grown accustomed to the high-speed, high-octane action that Volunteer offers when the best of the best roll onto the high-banked, red-clay oval.

While the Newport Nightmare Jimmy Owens owns the distinction for most wins at four (two with World of Outlaws, two with Lucas Oil), it’s Scott Bloomquist of Mooresburg, Tenn. who has been the most consistent force at the front of the field. The National Dirt Late Model Racing Hall of Fame inductee has two wins to go along with his unmatched 11 top five finishes and 14 top ten results at Bulls Gap, which is located about a half-hour away from his Team Zero shop in Mooresburg.

Along with the O-Show and Bloomer, Chris Madden of Gray Court, S.C. and Dale McDowell of Chickamauga, Ga. are the most notable performers on the 4/10th-mile speed plant. Both drivers own two victories at Volunteer and share 12 top ten finishes while Madden (8) bests McDowell (7) in top fives, but McDowell tops all in laps led with 195 circuits commanded.

Among the full-time Outlaws, there’s no doubt at all that the Drydene Performance Products backed duo of Bloomquist and Madden bring in the most impressive Bulls Gap resumes. On that note, the teammates will enter this weekend on opposite ends of the spectrum. Bloomquist is searching for a big rebound after a lackluster 13-race opening stint has him sitting eighth in points with just two top fives. Madden on the other hand, who runs fourth in points, is starting to make it click after he finished on the podium at Davenport Speedway and then earned the pole of the Dirt Late Model Stream at Eldora.

As always, Brandon Sheppard and the Rocket1 Racing, Valvoline No. 1 enter every event as a heavy contender for the win. The New Berlin, Ill. native got his groove back with a weekend sweep at Davenport Speedway on May 29-30, then led a majority of Eldora’s Dirt Late Model Stream before finishing fourth, and is now fresh off a pair of runner-up results with Lucas Oil this weekend at Cherokee (S.C.) and Smoky Mountain (TN). B-Shepp brings in a 74-point lead over Ricky Weiss, who will make his first World of Outlaws start at Volunteer Speedway this weekend.

Darrell Lanigan of Union, Ky., Chase Junghans of Manhattan, Kans., and Dennis Erb Jr.of Carpentersville, Ill. will all return to Bulls Gap this weekend in aim of adding to their previous top ten efforts at the track. The tight rookie of the year race will take Ashton Winger, Kody Evans and Matt Cosner to the 4/10th-mile for their first Outlaws appearance at Volunteer. Cade Dillard, Brent Larson and Boom Briggs round out the lineup of 13 full-time World of Outlaws Late Model drivers that will face the Tennessee locals this weekend.

The pit gates will open at 2:00pm, grandstands open at 4:00pm and hot laps start at 7:00pm both nights this weekend. You can buy your tickets HERE or watch online from home with DIRTVision, the official streaming partner of the World of Outlaws.