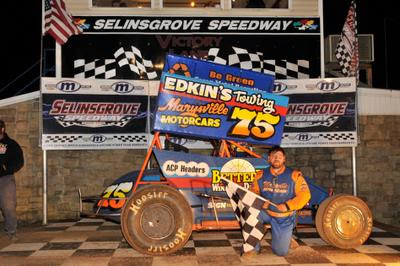 Brett Schadel of Herndon held off the charges of Jeff Rine and Coleby Frye to win the super late model main at Selinsgrove Speedway on Saturday night to score the fourth win of his career at the track, worth $2,500.

Kenny Edkin proved victorious in the return of the super sportsman division to the track for the first time since 2015, wiring the field for the win in the 20 lapper and Will Brunson picked up his first win of the year in the roadrunner division.

Kenny Trevitz of Winfield started on the pole of the 25-lap super late model main and led the first lap before a caution flag unfurled.

On the restart Schadel burst to the inside of Trevitz in the first turn to get the lead while sixth starter Coleby Frye followed him through to take over second.

Schadel entered the rear of the field on the seventh tour while at the same time fifth starter Jeff Rine made an outside move in the second turn to take second away from Frye.

Another caution flag then bunched the field before lap eight could be scored and to some surprise, Schadel pulled away from Rine on the restart, preventing a first turn challenged.

Schadel again entered traffic on the 13th lap, allowing Rine to eventually cut the advantage from 1.4 seconds to under one second but Schadel proved flawless in traffic to keep Rine at bay.

A final restart with six laps to go found Frye jet under Rine entering the first corner to steal the second spot away while Schadel pulled away to the victory in the closing stages.

Frye finished 2.258 seconds behind at the finish followed by Rine, Hayes Mattern and Jim Yoder.


Edkin started second and led all 20 laps of the super sportsman main to win his first ever feature at the oval.

The sportsman star, who is undefeated in sportsman action in the area so far this season, cut his teeth racing at Selinsgrove Raceway Park on Friday nights during his youth and was happy to graduate to a win on the big half mile.

Will Brunson started second in the 12-lap roadrunner feature and got the lead on lap six when early leader Scott Dunham Jr. didn’t take off on a restart.

Dunham’s slowing racer caused cars to scramble as the rest of the field came up to power and Brunson sped by for the lead and then fought hard to hold off Jake Jones and Dustin Snook to the finish.

The trio was headed out of turn four for the checkers when a caution flag unfurled, breaking up what was a scramble for the win in the final turns.

The restart saw Snook dive low to grab control in the first corner but Jones used that move to motor into second and get under Brunson as the pair headed to the checkers.

Jones came up a half car length short at the finish.

Heats went to Jones and Schreffler.