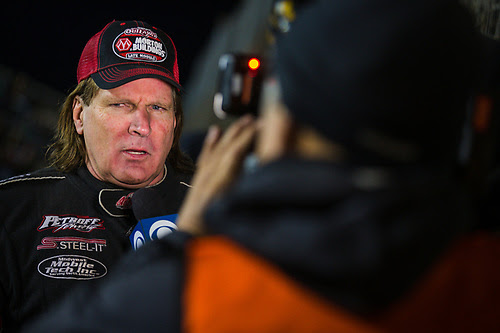 
With the World of Outlaws Morton Buildings Late Model Series heading for the 4/10th-mile oval this Friday & Saturday, June 19-20, local fans will have the chance to see Bloomquist compete at his home track for the first time in six years. It’s an opportunity that the National Dirt Late Model Racing Hall of Fame inductee is relishing in.


“It’s great, especially because I haven’t been there in quite a while,” said Bloomquist on racing close to home this weekend. “It used to be one of my favorite places to go, but man it’s been years since I’ve raced there. It really is a great race track, I know the new owners have made some improvements that I’m excited to see. It’s always nice being able to race so close to home, especially at a place that I love. I haven’t seen a lot of the local fans in awhile, so hopefully they all come out and support us.”

August of 2014 was the last time Bloomquist competed at Volunteer Speedway, but his knowledge and love for the place remains the same. After all, he’s got arguably the best resume of anyone in Dirt Late Model Racing when it comes to Bulls Gap. In 17 national touring races since 2004, Bloomquist leads everyone in top five finishes (11) and top ten finishes (14) with an additional two victories to his credit.

So, what about Volunteer Speedway clicks with Bloomer and his Team Zero Race Cars?

“I’ve just always liked fast race tracks and Volunteer is as about as fast as they come,” commented Bloomquist on his success at the track. “It’s high banked and the conditions are normally great. It’s not as intense as Tazewell, but it’s an intense place. I mean, you can drive VERY hard here, and I’ve always enjoyed driving hard. The faster the race track, the better.”

Sitting eighth in the current World of Outlaws Late Model Series standings, a Bulls Gap weekend is potentially just what Bloomquist needs to flip the switch and turn his season around. In 13 races on tour this year, the 56-year old legend has two top five finishes and four top ten results in his Drydene Performance Products No. 0 machine.


“Let’s just say this, we’re working on a lot of things around here that I think are going to boost my confidence,” noted Bloomquist. “Yes, we had a bad Eldora, but we had so many things go wrong that have never happened with mechanical issues, different parts on the cars, just all kinds of stuff. I am comfortable at Bulls Gap and that does bring some confidence, but I’m not any more comfortable there than I am at Eldora, I’ve always loved going there. This weekend will be fun though. The dirt they’ve got on the track and the way they’re preparing everything has me excited about going back.”

Considering all of his success and triumphs at the nearby track, the Mooresburg, Tenn. racer has countless memories at the Volunteer Speedway. But, what sticks out the most? A Bloomquist classic.

“We were on the pole for a Sunday race and I ended up going out with a friend of mine the night before,” said Bloomquist on his favorite Bulls Gap memory. “It was snowing when I went to bed, so I figured the race would be cancelled. Then at 12:00pm the next day, one of my crew guys found me and told me they’re hot lapping in an hour, but I was still at my friends house. We might’ve stayed up a little too late and my head was hurting the next day. I got the track and skipped practice. We went out there and ended up winning the race. I had people asking me how I ran so good that day and all I could say was ‘Nobody wanted this race to be over more than I did. The faster I run, the sooner this is over.'”

This weekend, Bloomquist will be back at Bulls Gap chasing his next memory at the track he calls home.

Fans looking to attend this weekend’s event can BUY TICKETS HERE. The pits are slated to open at 2:00pm both days with grandstands opening at 4:00pm and hot laps at 7:00pm. If you can’t make it in person, you can watch from home on DIRTVision, the official streaming partner of the World of Outlaws.