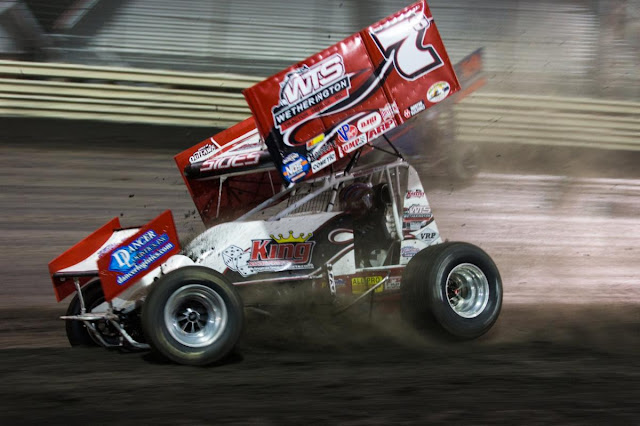 Sides won his first dash of the season and ran in the top five throughout most of the World of Outlaws NOS Energy Drink Sprint Car Series feature before finishing eighth. He is the third different driver to post a top 10 for Sides Motorsports this season.


"It was good, but at the same time you hate to lose spots," he said. "I was looking for a strong top five and ended up eighth."

Sides was efficient throughout the night, qualifying 16th quickest and advancing from third to second place in a heat race to lock into the dash.

"We got the lucky No. 1 for the dash and we won that," he said. "We were fine when we were out front by ourselves. Other than that we'd get a little tight behind other cars. They had worked the track before the feature. It had some wetness around the bottom with crumbs around the middle. When I started the race it hit some looser stuff and slid. (Daryn) Pittman got by and Logan (Schuchart) got by right away. I ran third and then (Brad) Sweet did a slider so I was fourth for the longest time until we got to traffic. The next thing you know I slowed down too much for the lapped cars and that's when Parker Price-Miller and Donny (Schatz) went by. I was running too hard and blew through the cushion on the next end and let two more go by."

The outing was an improvement from the opener, which began on Thursday with Sides qualifying seventh quickest and advancing a position to finish fourth in a heat race. Rain postponed the feature until Friday evening.

"We went down into the corner and got to the bottom to start the feature," he said. "Jacob Allen's car cut off. I checked up, (David) Gravel got in the back of me, (Mark) Dobmeier hit him and we all crashed. We had to restart at the tail end. We weren't good that far back in dirty air. It wanted to bike and try to flip on the first lap. I went to the bottom and once I got some speed up I moved back to the top."

Saturday's event finale began with Sides placing second in a qualifier to lock into the 12th starting position for the main event.

"On the start and restart I was in the wrong lane and I'd lose a couple of spots," he said. "By midpoint it started laying rubber and that was that."

He is heading to Cedar Lake Speedway in New Richmond, Wis., this Thursday through Saturday for the Independence Day Shootout with the World of Outlaws. Tim Kaeding will also be in a Sides Motorsports sprint car during the event.

"I do like that place," Sides said. "It's been good to us in the past. It will be a good event and we have TK with us in the second car so that should be fun."

"Shawn Dancer of Dancer Logistics has been with us for many years and he's helped us a ton," Sides said. "It's grown to be more of a friendship than a partnership."