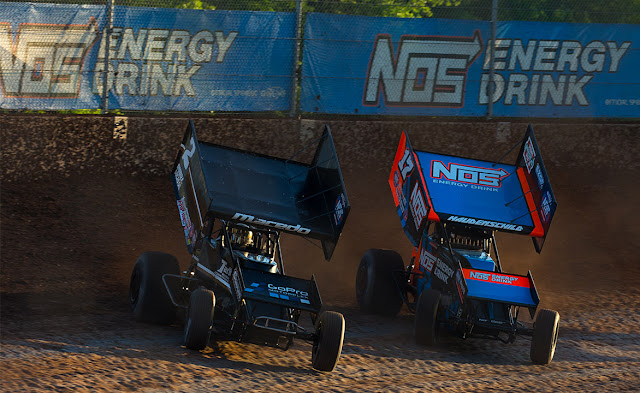 HAUBSTADT, IN – June 16, 2020 – Tri-State Speedway will make history with the World of Outlaws NOS Energy Drink Sprint Car Series this weekend on June 19-20. It'll be the first doubleheader at the Haubstadt, IN track in the history of the sport.

It will also mark the first time since 1995 that the World of Outlaws has been broadcast nationally. Saturday’s event will be live on CBS Sports Network, starting at 9 p.m. (ET) – both races on Friday and Saturday will also be live on DIRTVision.

The quarter-mile track has hosted some of the Series’ most excited battles due to its high corners creating close racing and constant wheelies down the straightaways. This weekend’s historic event should be no different.

HAUDENSCHILD HOT STREAK: After a mistake at Federated Auto Parts Raceway at I-55 that saw Sheldon Haudenschild flip while leading, the Wooster, OH-native has been on a streak of five top-five finishes in the last six races. He’s coming off two fifth place finishes in a row at Knoxville Raceway – which helped propel him to fifth in points.

He and his Stenhouse Jr.-Marshall Racing team have been knocking on the door of their first win in 2020. Tri-State Speedway could be the site of that victory if Haudenschild is able to back up his second place run in October. Christopher Bell won the race, but Haudenschild was the show in his NOS Energy Drink #17, charging from 18th to the runner-up spot through heavy traffic and tight quarters racing.

SWEET HOLDS TOP SPOT: Reigning World of Outlaws champion Brad Sweet, of Grass Valley, CA, kept his Kasey Kahne Racing team at the top of the point standings after the doubleheader weekend at Knoxville Raceway – now 26 points ahead of 10-time Series champion Donny Schatz. He finished 12th the first night – his first time outside the top-10 this year – and rebounded with a second place finish the following night.

He’ll look to keep his NAPA Auto Parts #49 up front during the doubleheader at Tri-State Speedway – a track he’s yet to win at. He finished fifth at the quarter-mile track in October.

SCHATZ LOOKING FOR FIRST: There are only a handful of tracks on the World of Outlaws tour that 10-time Series champion Donny Schatz, of Fargo, ND, hasn’t won at. Tri-State Speedway is one of the most notable. In 21 starts at the quarter-mile track Schatz has a career best finish of third in 2008 – his only podium at the track.

Bad luck robbed him of a decent finish at the track last year after Schatz got ran into the back of and spun out – ending the night 13th. He’s coming off an 11th place finish at Knoxville, heading into the doubleheader weekend at Tri-State with his #15 Tony Stewart/Curb-Agajanian Racing crew. A win at the speedway would not only check another track off his list but bring him another step closer to his 300 career wins milestone – he’s currently sitting at 296 wins.

MACEDO RIDING MOMENTUM: Last year’s Rookie of the Year Carson Macedo, of Lemoore, CA, has been quietly consistent this year with his Kyle Larson Racing team, finishing outside the top-10 only twice in the first 12 races. He also picked up back to back fourth place finishes at Knoxville.

He’ll look to ride that momentum into the doubleheader weekend at Tri-State Speedway. He finished 10th at the track last year but was also one of the best drivers on quarter-mile tracks in 2019 in his Tarlton & Son #2. He won at Silver Dollar Speedway and Jacksonville Speedway, and finished second at Placerville Speedway.

SCHUCHART BACK ON TRACK: After two races in a row of finishing outside the top-20, Logan Schuchart, of Hanover, PA, returned to the podium at Knoxville Raceway on Saturday.

Before those two poor finishes, Schuchart hadn’t finished outside the top-10 all year and had the points lead. Now, he sits third in points, looking to put his Drydene #1A back on top for Shark Racing. However, Tri-State Speedway has been one of his worse tracks. He never finished better than 17th in his first five starts there – finishing 22nd in his first four. That streak was broken last year, though, when he earned at ninth place finish.

GRAVEL & PITTMAN ON REBOUND: David Gravel and 2013 World of Outlaws champion Daryn Pittman are both searching for the consistency and wins they had last year. Gravel won at Knoxville Raceway in May but has had an up and down season since with Jason Johnson Racing and Pittman is still looking for his first win in 2020 with Roth Motorsports.

Gravel, of Watertown, CT, earned a podium finish during the first night of the Knoxville doubleheader, but then found himself a lap down in the back of the field the next night. Pittman, of Owasso, OK, was poised for a potential victory at Knoxville Saturday night, sitting on the pole and pulling away to a three second lead in the first few laps. However, he made contact with Gravel while trying to lap him and the two spun out. Pittman finished 18th and Gravel finished 19th.

Pittman had a solid eighth place run at Tri-State Speedway last year, while Gravel finished 12th. But Gravel has two wins at the track and is the only current full-time driver that has won there – most recently in 2018.

SWINDELL STILL SWINGING: At 64 years old, in his 50th year of racing, there is no slowing down three-time World of Outlaws champion Sammy Swindell. In his first two starts of 2020 – driving his son Kevin Swindell’s #39 Swindell Speedlab car – “Slammin’ Sammy” earned back to back top-10 finishes at Knoxville Raceway.

He’ll make his World of Outlaws return to Tri-State Speedway for the doubleheader weekend. He has five wins on the quarter-mile track – the last one coming in 2011 – and still holds the track record of 11.110 sec. that he set in 2004.