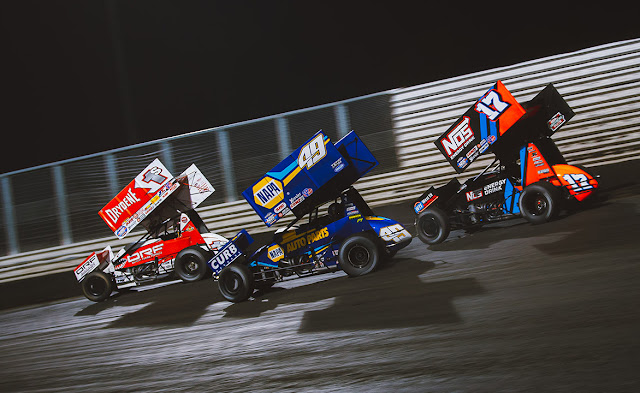 NEW RICHMOND, WI – June 29, 2020 – Independence Day weekend will host the biggest dirt racing event with the World of Outlaws to this point in 2020.

For the first time in history, outside the World Finals, the World of Outlaws NOS Energy Drink Sprint Cars and Morton Buildings Late Models will share the top of the bill for the July 2-3-4 mega event at Cedar Lake Speedway.

The event at the 3/8-mile track will include Qualifying and a pair of $3,000-to-win, 20-lap Showdowns for each series on Thursday. Friday and Saturday will consist of full race programs including Heat Races, Last Chance Showdowns, and a pair of $20,000-to-win, $1,000-to-start Features – 35 laps each for Sprint Cars. It will also be the first major American sports event contested with a full crowd and will feature a state-of-the-art coronavirus testing screening.

With half of the season down already, the hunt for wins and points will be taken to the next level this weekend.

Here are the top World of Outlaws Sprint Car storylines to follow this weekend:

JAWS WIDE OPEN: Once a small team from Hanover, PA simply trying to make World of Outlaws events, Shark Racing is now a top competitor every weekend with the likes of Kasey Kahne Racing and Tony Stewart/Curb-Agajanian Racing. Logan Schuchart is coming off the biggest win of his career, claiming his first AGCO Jackson Nationals title last weekend, and Jacob Allen performed well all three nights at the Nationals, even claiming a Quick Time award.

Cedar Lake could prove to be another feeding ground for the two Shark Racing drivers. Schuchart earned his first career win at the 3/8-mile track in 2016. And Allen had two solid runs there last year, finishing 13th and 10th. Schuchart already has four wins this year, while Allen continues to search for his first. With momentum on their side, there’s a strong chance both could park their Drydene cars in Victory Lane.

"BIG CAT" ON THE PROWL: Reigning Series champion Brad Sweet, of Grass Valley, CA, is not making the 2020 title hunt easy on other drivers. He enters the Cedar Lake event with a 66-point lead over 10-time Series champion Donny Schatz and currently has the most wins this year with five.

Sweet and his Kasey Kahne Racing team showed they were a championship caliber team last year at Cedar Lake during a single-day doubleheader Feature event. A part failure forced their first DNF of the year in the first Feature with racing scheduled to start again in about an hour. The KKR team thrashed to get a backup car ready for the second race of the night. Sweet dominated the second Feature and put his NAPA Auto Parts #49 in Victory Lane. “The Big Cat” will be on the prowl to do the same again this weekend.

SCHATZ LOOKING FOR MOMENTUM: When asked what it would take to win the Jackson Nationals, without hesitating, Donny Schatz said, “A one lap head start.” The 10-time Series champion’s answer summarized how his 2020 season is going at the moment.

While Schatz is second in points with two wins, he and his Tony Stewart/Curb-Agajanian Racing haven’t had the consistency they’ve wanted. He’s had four finishes outside the top-10 in the last seven races. However, he started to build a little momentum in the final two days of the Jackson Nationals, earning a top-five and two top-10 finishes.

Cedar Lake has been a good track for the Fargo, ND driver. He has five wins there – the last coming in 2016 – and finished second and seventh last year.

KNOCKING ON VICTORY’S DOOR: Sheldon Haudenschild, of Wooster, OH, has gone from knocking to banging on the door for a victory this year. The Stenhouse Jr.-Marshall Racing driver has gone on a run of nine top-10 finishes in a row – seven of them being top-five finishes. That even trumps reigning champion and current points leader Brad Sweet’s run of six top-10s in a row.

Haudenschild earned his first win of 2019 at Cedar Lake Speedway, passing 10-time Series champion Donny Schatz to get the job done. That win set him on a path of consistent top-10 finishes and led to his Ironman 55 win. He’ll look to repeat his Cedar Lake victory this weekend in his NOS Energy Drink #17 and put his team on a winning path for the rest of 2020.

GOING THE RIGHT DIRECTION: After two podium finishes in a row at Jackson Motorplex, 2013 Series champion Daryn Pittman and his Roth Motorsports team are starting to turn their 2020 season around.

At the beginning of June, Pittman went on a streak of three finishes outside the top-10. But since the doubleheader at Tri-State Speedway, the Owasso, OK driver has been on a run of five top-10s in a row. He also put himself in contention to win the last two Features at Jackson. While he said, there’s still work for he and the team to do to get themselves back in Victory Lane, they’re gaining on it. He’ll be going for his first win at Cedar Lake Speedway this weekend.

The Lemoore, CA driver has yet to win on a 3/8-mile track with the Series but finished third at the last Cedar Lake event. He continues to be one of the most consistent drivers this year, having finished outside the top-10 only three times this year. He’s currently tied for the second most top-10 finishes this year with Logan Schuchart. They both have 14. Brad Sweet has 16 – and 14 top-five finishes.