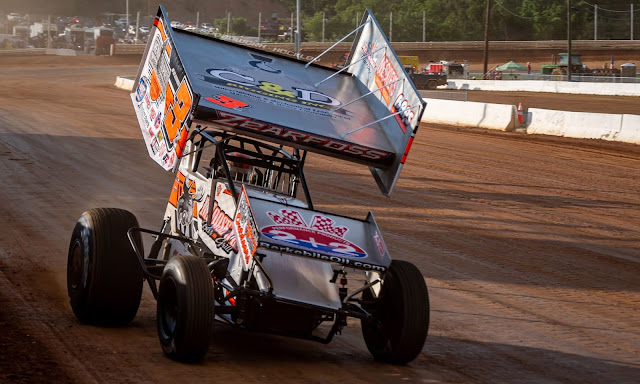 JONESTOWN, Pa. (June 22, 2020) – After spending nearly two months out on the road competing head-to-head with the World of Outlaws Sprint Car Series and All Star Circuit of Champions, the ‘Jonestown Jet’ Brock Zearfoss returned home to Central Pennsylvania and made an appearance at familiar stomping grounds, joining the weekly field at Port Royal Speedway for Open Wheel Madness action on Saturday, June 20.

Although forced to start 15th on the feature grid, the former Port Royal Speedway track champion charged to tenth by the time the final checkers were given, not only adding one more mark in the top-ten column, but giving the team an entire test session for the upcoming Keith Kauffman Classic featuring the All Star Circuit of Champions on Wednesday evening, June 24.

Certainly no stranger to All Star Circuit of Champions competition, the ‘Jonestown Jet’ is a recent winner with America’s Series and secured $5,000 during a visit to Southern Oklahoma Speedway in Ardmore, Oklahoma, on Thursday, June 11.

“It was good to get back to Port Royal. We were gone a long time, racing at tracks we’ve never seen before, so it was nice to get back to familiar territory,” Brock Zearfoss explained, driver of the Brock Zearfoss Racing/Moose’s LZ Bar & Grill/Heavy Equipment, Loaders & Parts Inc./C&D Rigging Inc./BAPS Auto Paints & Supply/Meckley’s Limestone Products/Berkebile Oil Company/Klick Lewis Cars/J.P. Adamsky Trucking/X-1 Race Cars/No. 3Z sprint car. “With the All Stars coming to Port Royal on Wednesday, it made sense to get there and turn some laps. Shane and Tye have been busting their butts and I’m confident we’ll be ready to represent our fans and partners in a big way during the Keith Kauffman Classic.”

Additional plans for Brock Zearfoss and Brock Zearfoss Racing have yet to be determined. Fans are encouraged to stay alert on social media for continuing updates.