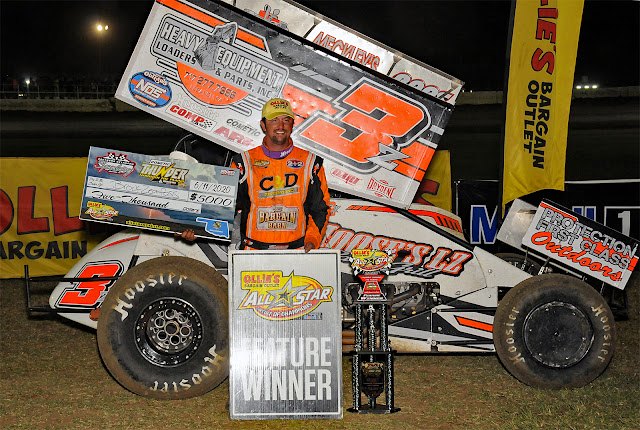 JONESTOWN, Pa. (June 16, 2020) – Brock Zearfoss’ eight-race swing through America’s heartland was hot and humid, but it also proved successful, concluding the modern Thunder Through The Plains campaign with five top-ten performances, one of which a victory at Southern Oklahoma Speedway in Ardmore, Oklahoma, on Thursday, June 11. The win, resulting in a $5,000 payday, was Zearfoss’ first of the season on the All Star trail, but second overall, also earning top honors during Open Wheel Nationals action at Park Jefferson International Speedway in late-April.

In addition to his victory, the Jonestown, Pennsylvania-native recorded top-ten finishes at Red Dirt Raceway (9th) on June 5, Devil’s Bowl Speedway (8th) on June 10, Monarch Motor Speedway (3rd) on June 12, and Lonestar Speedway (5th) on June 13. With all results considered, Brock Zearfoss and Brock Zearfoss Racing concluded Thunder Through The Plains sixth the standings and is now fourth in the overall All Star Circuit of Champions driver standings.

“It was a long few weeks, but we had fun. To get a win at a track we’ve never seen before says a ton about my team and what we are capable of doing. Tye and Shane never gave up and they worked their asses off the entire time we were on the road,” Brock Zearfoss said, driver of the Brock Zearfoss Racing/Moose’s LZ Bar & Grill/Heavy Equipment, Loaders & Parts Inc./C&D Rigging Inc./BAPS Auto Paints & Supply/Meckley’s Limestone Products/Berkebile Oil Company/Klick Lewis Cars/No. 3Z sprint car. “I want to thank all of our fans and partners for supporting us during Thunder Through The Plains. The group that backs this team is second to none. Without their support, a trip to the Midwest would not be possible. Our goal is to keep moving forward and hopefully find victory lane again very soon.”

With an off-weekend ahead, which will be spent at the Port Royal Speedway ‘Speed Palace,’ Brock Zearfoss’ All Star Circuit of Champions schedule will not resume until Wednesday evening, June 24, when the Series visits Port Royal for a special midweek edition of the Keith Kauffman Classic. The Wednesday night showcase will be followed by a trip to Volunteer Speedway in Bulls Gap, Tennessee, on June 27 & 28.