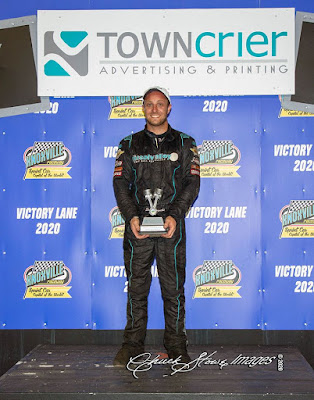 "When I left home a few years ago the only place I ever wanted to win a race was at Knoxville Raceway," the Australian said. "The other races, yeah that's the goal to win. But if I never won a race at Knoxville it would have really bothered me. I'm glad we got that out of the way."


Bogucki kicked off the weekend by qualifying seventh quickest on Friday before he charged from fifth to win a heat race. That lined him up on the inside of the second row for the A Main.

"The first night in the feature I got the car way too tight," he said. "I fell back real fast. I was maybe 10th. I was trying to hang onto it. I searched and searched. I was too tight to run anywhere."

Bogucki hustled to a seventh-place outing.

Saturday began with Bogucki posting the fifth quickest time in qualifying. He then finished sixth in a heat race, but damage sustained during the race forced the team to work extra hard prior to Bogucki starting on the pole in the feature.

"I made a mistake in the heat race and knocked the rear end out of it," he said. "We thrashed to get it ready for the feature. We made half the adjustments that we did on Friday because I was not going to let myself get too tight again."

Bogucki led throughout the feature before slipping to second in the closing laps.

"I led one of these two years ago and Clint Garner got me with two laps to go," he said. "I was thinking, 'Not again.' I let it rip."

Bogucki stuck the bottom groove entering turn one on the final lap and edged into the lead exiting turn two. The battle for the win was nearly even in turns three and four with Bogucki using the bottom lane to propel him to the victory.

"It's the best race car I've ever had come feature-time at Knoxville," he said. "I've never had it where I could run it that hard and deep.

"I was looking at this weekend as a two-day test. I'm pretty happy with it."