Carney II Strong Early Before Misfortune Strikes at I-30 Speedway 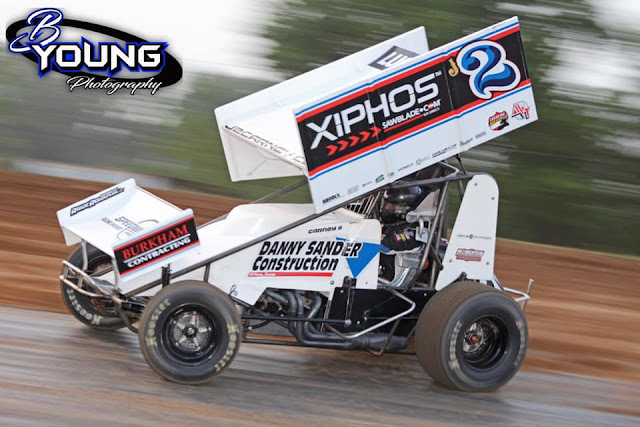 Carney II won a Lucas Oil ASCS National Tour heat race after starting on the outside of the front row before he maneuvered from fifth to third place in a qualifier. That ranked him fourth in points out of the 40-plus competitors.


"I think we were half a second quicker than anyone in the heats," he said. "We made an adjustment for the qualifier. We were three wide for the lead going to the stripe. That track is about two wide, not three wide. If the two guys in front of us weren't racing side by side I think we could have got another position or two. We left the car alone for the feature. I don't know if it was the first lap or the second lap, but someone right reared me. I made it three or four more laps before the drag link broke. When I spun out I got hit and it bent the front axle."

Carney II started fourth and was battling for a top five during the opening laps before the incident ended his night early. It was a typical result during what has been a tough start to the ASCS National Tour season.

The series resumed action last Thursday at Caney Valley Speedway in Caney, Kan., after being dormant for more than three months. Carney II struggled to find a balance in his race car all night, finishing fifth in both a heat race and a B Main.

"I think last year I missed one ASCS National Tour race," he said. "That was the first one I remember missing other than when I first started racing. The deal the other night marked three in a row. Just weird stuff going on. I was so mad about Thursday. To start up front and not be able to maintain was terrible. Backing up is not something I'm okay with. We ran a lot better at I-30 Speedway, but just ran into misfortune."

Carney II will team up with Scott Brown to tackle the 2020 Scooter Matthews Memorial/Firecracker Shootout this Friday and Saturday at West Texas Raceway in Lubbock, Texas. The duo has three feature victories together this season.

Friday and Saturday at West Texas Raceway in Lubbock, Texas, for the 2020 Scooter Matthews Memorial/Firecracker Shootout

Mesilla Valley Transportation is one of the largest transportation providers in Western Texas and New Mexico. The company specializes in time-sensitive service between major manufacturing areas in the United States and Canada and the borders of Mexico. For more information, visit http://www.M-V-T.com.

"I've been friends with Royal for basically my whole life," Carney II said. "He's been the promoter for both of my hometown tracks. He's been a big supporter of my racing. He's a real racer who helps racers, has a race track, has race cars and runs a great trucking company."

*PHOTO BY B YOUNG PHOTOGRAPHY*