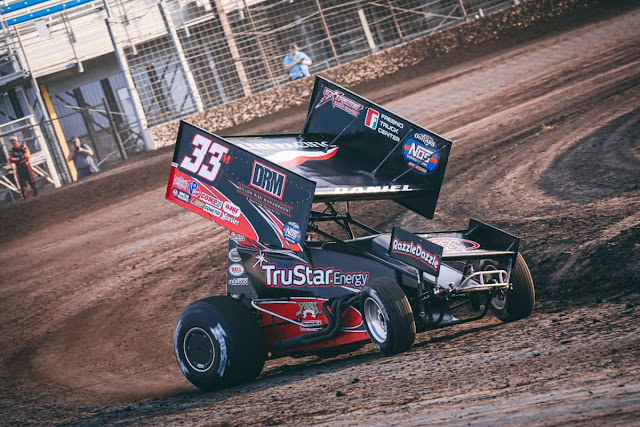 Daniel made the most of his debut at the track, tying his second-best result of the season with the World of Outlaws NOS Energy Drink Sprint Car Series last Friday before establishing a new career-best Outlaws finish on Saturday.


"It was a good weekend," he said. "We've had these flashes of good runs and then some bad runs follow. I think we're definitely improving. I am more consistent than I was at the beginning of the year."

Daniel qualified 19th quickest for Friday's show. He placed seventh in a heat race before winning the Last Chance Showdown, which earned a transfer into the back of the A Main.

"They reworked the track before the main event," he said. "It seemed like you could run wherever and maintain the same speed. I couldn't figure out where to run to be fastest and ended up on the bottom. I didn't really make any progress as we battled around 20th the whole race."

The 20th-place result was followed by a stout run on Saturday. Daniel, who had qualified 23rd quickest, finished eighth in a heat race before advancing from fourth to second place in the Last Chance Showdown. He then maneuvered from 20th to 13th in the main event.

"Saturday was a really good night in the main event," he said. "I think the track was in a different state starting earlier and it slicked off more. They reworked it for the A Main and it was a really racy track. I started off running the middle. Then I started moving up the track. I worked up to 11th or 12th. I destroyed the wall in turn four in the middle of the race and wasn't sure if I had a bent wheel. I was running pretty hard against it and thought there was a small cushion out of turn four. I went in harder than I had been to get a run on Dominic Scelzi and Daryn Pittman. Jacob Allen got by us when that happened. Then we had a red flag and I went to the bottom and lost a couple spots. I pulled my wing back and was able to run along the right rear of the cars running the bottom and made up ground in the closing laps."

Daniel's seven positions gained were the second most of the drivers in the field.

"It was a big confidence boost that we can start in the back and run toward the top 10," he said. "Thanks to my guys for the hard work. It's great to see our results improving."

Daniel has a trio of Outlaws shows on tap this weekend beginning on Friday at 34 Raceway in West Burlington, Iowa. He will then make his debut at Wilmot Raceway in Wilmot, Wis., on Saturday during the Badger 40. The weekend concludes on Sunday at Terre Haute Action Track in Terre Haute, Ind., where Daniel made his World of Outlaws debut in 2018.

Friday at 34 Raceway in West Burlington, Iowa; Saturday at Wilmot Raceway in Wilmot, Wis., for the Badger 40; and Sunday at Terre Haute Action Track in Terre Haute, Ind., with the World of Outlaws NOS Energy Drink Sprint Car Series


Extreme Brand Products, which is based in House Springs, Mo., aims to be the leader in research, selling and marketing high quality race oil, race fuels and performance lubricants. For more information, visit http://www.ExtremeBrandProducts.com .

"This is the first time that Extreme Brand Products is getting into the sprint car world," Daniel said. "We're very excited to work with them with engine oil, rear end oil and brake cleaner along with degreasers. Their products are tremendous and will help us on our way to a successful season."