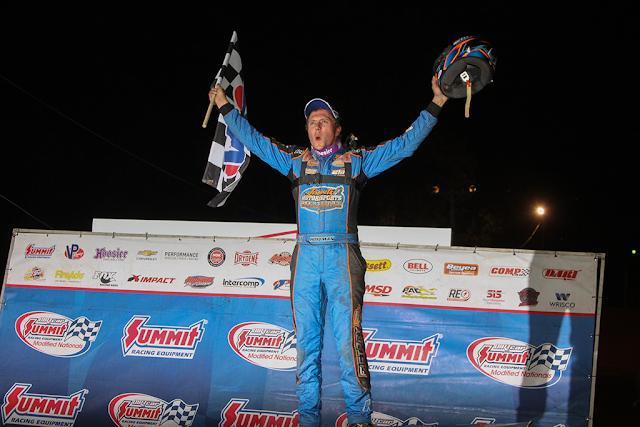 Just three different drivers have hoisted the coveted championship trophy over the nine completed seasons. Mike Harrison stands atop all drivers with six championships to his name and 49 Feature victories; Nick Hoffman is the two-time and defending Nationals champion with 26 total wins; Kenny Wallace is the 2012 tour champion and has collected seven Nationals victories in his career.

The great relationship shared between DIRTcar Racing and Summit was established in 2011 and has since seen the Modified Nationals blossom into one of the most competitive UMP Modified tours in the Midwest. As they enter their 10th year of title sponsorship, the staff at Summit could not be prouder to finally see the racing season kick off with the opener at Brownstown Speedway on July 8.

“Summit Racing Equipment is proud to be a part of the DIRTcar family and it has been exciting to watch the series become one of the most prestigious Modified tours in the country,” said Summit Motorsports & Events Manager Jim Greenleaf. “None of this would be possible without the support of all the great Modified drivers that have taken part in the series, including our champions. We look forward to an exciting 10th year and crowning the champion.”

As enjoyable as it’s been for Summit to see the tour grow over the past 10 years, it’s been just as exciting for the drivers to compete in every summer, night-in and night-out.

Wallace often looks back on his championship-winning season with lots of fond memories of the road, his crew and the two nights he visited Victory Lane that year.

“It is, by far, my most memorable year in dirt,” Wallace said. “2012 is my favorite year in dirt racing. It was a really fun year, had a good crew. I had a lot of people, a consistent team. Everyone did their jobs, everybody was gelling, nobody was married, nobody had kids. It was really fun.”

Many fans know him from his time spent on NASCAR television broadcasts, but in recent years, Twitter has been The Herminator’s platform of choice for his positive, silly and often times inspirational videos taken with his phone. His plentiful fanbase has been enjoying them ever since he returned to the DIRTcar circuit, and they’ve become one of his favorite pastimes on the road.

“2012 was the year where my team was playing along and doing the videos with me. We really enjoyed stopping at all the truck stops, grabbing the Steak N Shake at two in the morning. I think, personally, that’s what stands out to me,” Wallace said.

As an established UMP Modified veteran, Harrison knows what it means to have such a great relationship with sponsors like Summit and has always had the upmost pride in racing under the Summit banner.

“Summit really stuck their neck out for us 10 years ago and did this whole deal,” Harrison said. “Having somebody like that come aboard and do something for us, and allow us to go race far, it’s great.

“I’ve carried the Summit banner on my car ever since they started. I truly feel that I owe that to them, just for what they have done for us. I make sure, every year, that I have the proper Summit decals on my car, not just during the Summer Nationals.”

The defending champion also has a lot of appreciation for Summit’s support over the years.

“It’s pretty cool that they do this for us. They also help out with the Mod Mania deal at Tri-City [IL]. So, they’ve done a lot for us Modified guys. It’s definitely a working-man’s tour for us,” Hoffman said.

Coming off one of the best years of his career, Hoffman is set to defend his crown this season on the back of another DIRTcar Nationals crowning in February. He’ll be aboard NASCAR veteran Justin Allgaier’s #7 Elite Chassis for the first half of this year’s tour, looking for the same tenacity he displayed in 2019 with 12 Feature wins.

“I’m one of the lucky ones – I’m able to drive racecars for a living, and I also own my chassis company. So, I’ll have stuff getting done here while I’m on the road. But right now, I feel like I’m in my prime age of racing and need to get it done while I can,” Hoffman said.