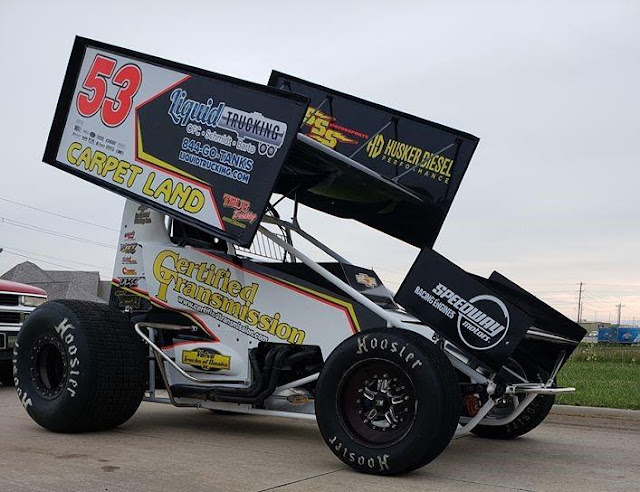 It was a strong run to cap a two-day weekend at the half-mile oval, where Dover wanted to get laps prior to the 360 Knoxville Nationals next month.


"We went to dial in for the 360 Nationals and it was two good paying nights," he said. "It was totally worth it. But at the end of the day it wasn't about the money, it was about getting that place figured out.

"Every time we went on the track we moved forward. From what we learned the final night I think we should be pretty good the next time we go back there."

The weekend started on Friday with Dover qualifying 20th quickest. He then won a heat race to garner the 13th starting position in the main event.

"We rode around there in 15th or so and the last couple of laps the car got better," he said. "We have to figure out how to make the car good from the start to the end, not just from midway through the race to the end."

Dover ended 12th, which snapped his streak of 10 straight top 10s to start the season.

However, Saturday featured a rebound as Dover qualified ninth quickest. He then charged from fourth to win a heat race. Dover spent the feature duking it out for a top five before a late-race move gave him fourth place.

"I think we rode around sixth or seventh most of the race," he said. "We got up to fourth with about five or six laps to go. Harli White was in front of us by a straightaway and we reeled her in. Our car really came on there at the end. I wish we had a yellow with a couple of laps to go because I think we had something for those guys up front."

Dover plans on returning to action this Friday with the Midwest Sprint Touring Series at Rapid Speedway in Rock Rapids, Iowa.

Also of note, Dover is gearing up to make his debut during the 305 Sprint Nationals at Belleville High Banks in Belleville, Kan., on July 31 and Aug. 1. He will pilot his No. 53 during the marquee 305ci winged sprint car event.

Backlund Plumbing started in Omaha, Neb., in 1932, and over the years has grown to be one of the largest and most respected plumbing companies in Nebraska. The business has a full staff of professional licensed plumbers and customer service representatives as well as a fleet of fully equipped residential and commercial plumbing trucks and a 10,000 square foot warehouse. The one thing that has stayed consistent is customer satisfaction. Backlund is known for honesty, quality and reliability, and is one of the few companies that still stands behind its work with a full "customer satisfaction guarantee." For more information, visit http://www.BacklundPlumbing.com .

"Chris Roseland with Backlund Plumbing has been a great friend of mine for the last few years," Dover said. "He's always there for me and puts me in his race car several times each season. We really appreciate his support and friendship."