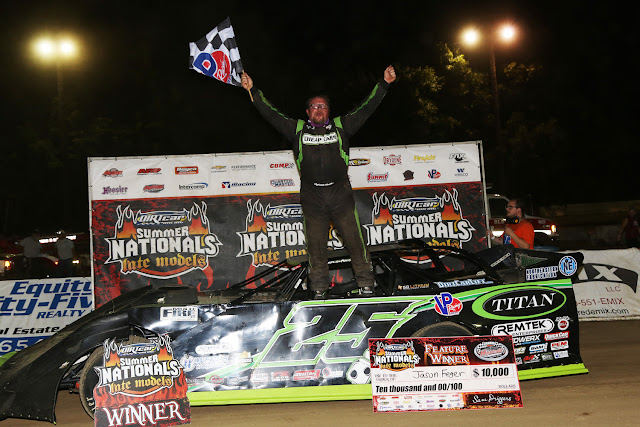 HIGHLAND, IL – July 18, 2020 – They call him The Highside Hustler, but it was the very bottom lane that won Jason Feger his 20th career DIRTcar Summer Nationals Feature in an epic climb from his 16th starting spot Saturday night at Highland Speedway.

Feger began his run to the front with some good fortune, gaining a few spots under caution from cars wrecking in front of him. But as the long green flag stretch began just under halfway, Feger had already picked off 10 spots of position and arguably had the fastest car on the racetrack.

While the leaders ran the momentum line up top around the high-banked quarter mile, Feger was smooth sailing down low. And before they knew it, Feger had cracked the top-five and was coming after them.

His targets were taken down in rapid succession – Rodney Melvin on Lap 22; Gordy Gundaker on Lap 25; Brian Shirley on Lap 32, Bobby Pierce on Lap 35 and defending race winner Shannon Babb for the lead on Lap 41. The last of which was done in heavy lapped traffic, with Feger having to move up to the middle to get around slower cars glued to the bottom and steer clear of Babb, who was ripping the top side.

As the flagman gave the signal for 5-laps-to-go, Feger was multiple car lengths ahead and pulling away. He crossed the finish line, one fist in the air out the window, and met a very excited crew in Victory Lane to relish in the $10,000 victory with him.

“That’s a long way to go at this place,” Feger told Summer Nationals Announcer Ruben Mireles in Victory Lane. “I had a little luck. I was able to avoid the wrecks and got a few free spots that way.”

“I just thought that’s exactly how I do it, just putting right around the bottom like that. I just thought I’d stay down there and be patient and see what came to me.”

Pierce passed Babb for second in the thick of the same lapped traffic that Feger sliced through to come home second; Babb held on for third. Gordy Gundaker collected by another top-five finish in fourth, and Ryan Unzicker swiped fifth away from Shirley on the final lap.

The DIRTcar Summer Nationals Late Model action continues on Sunday, July 19 with the tour’s debut at Randolph County Raceway. Catch all the action live on DIRTVision presented by Drydene.

Another chapter in the big book of Mike Harrison’s dominance at Highland Speedway was written on Saturday night as he scored the 51st Summit Modified victory of his career over Ray Bollinger and Zach Schantz.

Harrison won his heat and redrew the pole for the 25-lap Feature, jetting out to an early lead that he would never relinquish. Lapped traffic was unable to slow the Highland-native’s pace as he led the field back to the checkers untouched for his sixth Feature win in Summit Modified action at Highland.

Coming into the night, Harrison said he felt a bit of added pressure to win with all the extra family and friends on hand for a special night they and the track dedicated in memory of their friend Brett Korves. Needless to say, he wanted this one bad.

“This, right here, this means everything,” Harrison said in Victory Lane. “It would have taken something for somebody to beat me in this race because I probably would have destroyed my car to win this race, to be honest with you.”

Bollinger and Schantz held onto their podium spots while Tyler Deibert and Jeff Leka rounded out the top-five.

The Summit Racing Equipment Modifieds next head to Moberly, MO, on Sunday for a debuting visit to the Randolph County Raceway. Catch all the action live on DIRTVision!