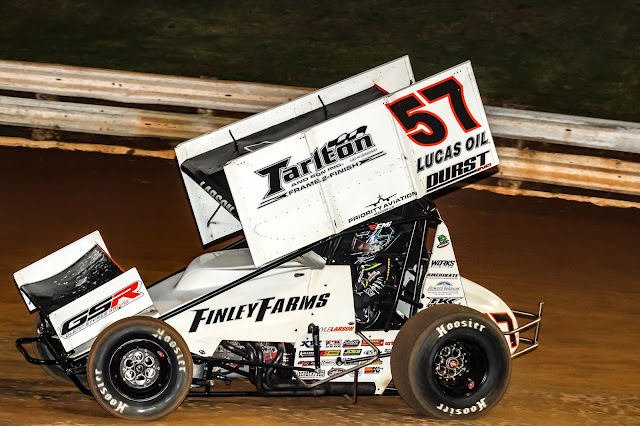 Larson’s first career Williams Grove win was worth $15,000. It was his third win of Speedweek and nearly clinched the series championship for the Elk Grove, Calif., driver.

“I had a really, really good car, but I had a bad start and fell back to fifth,” Larson said. “I was able to get back to third quickly.”

“Its nice to come back here and be really competitive with Paul (Silva),” Larson said. “It’s cool to get both of our first wins here at Williams Grove. This is one of the most historic race tracks in the world. To put my name on the winners list is pretty special.”

Lance Dewease started on the pole and led the opening lap with Brent Marks close behind. A five-car crash exiting turn four stopped the race. Jeff Halligan, Chase Dietz, Brock Zearfoss, Matt Campbell and Mike Wagner were involved. A few of the cars flipped. No injuries were reported.

A complete restart ensued with Dewease once again leading and Marks right behind. Marks didn’t let Dewease get away and a third turn pass got him the lead with three laps completed.

Marks pulled away to a comfortable lead over Dewease with Larson charging from third. Brian Montieth passed TJ Stutts for fourth.

Marks began lapping slower traffic on lap 14 and this allowed both Dewease and Larson to close dramatically. Montieth was not far back either.

Marks stayed up around a fast cushion as Dewease tried to make the low and middle groove work. Larson passed Dewease off turn two with 12 laps to go and began tracking down Marks.

“He was searching for the middle and I was able to slide him,” Larson said. “The top in one and two started to go away and I could see their noses inside of me, so I moved down.”

As Marks worked the top, Larson tried a bit lower line and finally got another shot.

“I wasn’t expecting him to go to the bottom,” Larson said. “He’d been running the top. I got a good run off four and I had enough of a gap in front of me, I was committed to slide him and he shut it down. I thought we were going to crash. I hate that I got into him. You’re trying to judge things so quickly here. You’ve got to make all your passes in the corners. You’ve got to be really aggressive.”

Marks tried to take the lead back, but Larson got by slower traffic better. Marks was held up and Dewease got back by for second. Rico Abreu and Freddie Rahmer completed the top five. Danny Dietrich, who started 18th, Ryan Smith, TJ Stutts, Chad Trout and Lucas Wolfe rounded out the top 10.

Dewease set quick time over the 38-car field with a lap of 17.330 and he also won the opening eight-lap heat race. Brian Montieth won the second heat. Three laps were completed in the third heat race when a rain shower hit the track. It created about a 75-minute delay. When racing resumed, Marks held off Larson to win the third heat. TJ Stutts won the final heat. Matt Campbell won the B-main.