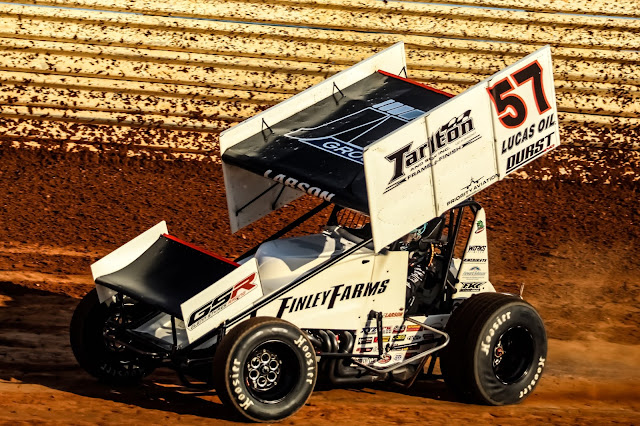 Port Royal Speedway- PORT ROYAL, Penn- (July 5, 2020) Kyle Larson arrived in Central Pennsylvania nine days ago for the 30th Annual Pennsylvania Speedweek presented by Red Robin Gourmet Burgers as one of the hottest drivers in the country. It's safe to say that after the completion of Saturday night's 2nd Annual Greg Hodnett Classic at Port Royal Speedway, he's not just hot, but scorching.

Larson overtook Logan Wagner on lap 10 and held off the heavy pursuit of Brent Marks and Rico Abreu for the remaining 20 laps to pick up his first career win at the Juniata County oval. The win was worth $10, 027 and put the final touches on what was a dominating PA Speedweek for the California native that had him capturing four victories and a championship when all was said and done.

He also earned an additional $1,027 courtesy of Ron Rutherford and fans for stopping the streak of four in a row by Anthony Macri at 'The Speed Palace'.

"This place has turned into maybe my favorite racetrack and it's one of the nicest dirt tracks in the world right now," said Larson. "Seeing the crowds so amped up and the atmosphere here, it's just really cool for us drivers and I really wanted to get a win here to back up Williams Grove."

Anthony Macri kicked off the night by earning $250 for fast time courtesy of Packer's Concessions, LLC. and it appeared that we might be in for a fifth straight triumph for the Dillsburg, Pa. native.

However after a top eight re-draw, it was current Weikert's Livestock 410 Sprint Car point leader Logan Wagner along with Marks leading the field to the green flag.

Wagner got the early jump and quickly moved to the top of the speedway entering turn one, but Marks threw a viscous slider underneath him to briefly take the lead before Wagner pulled back in front of him down the backstretch to lead lap one.

However, racing would be halted after Kyle Moody got turned upside down in turn one the following circuit and collected Jason Schultz. Both drivers would be ok, but neither would rejoin the field.

On the restart, Marks tried again, with Wagner crossing back under him to take the advantage again on the backstretch. By then Larson, who had advanced to third form the fourth starting position on the opening lap, was heavy on the tail of Marks.

He ducked under Marks entering turn one and the two raced side-by-side, with Larson holding second by a nose at the line.

By lap five, Wagner held close to a 2.0 second advantage over Larson, but within two laps the advantage was cut in half. With Wagner heavy in lap traffic on lap 9, Larson pulled to the tail tank of the Zemco sprinter coming to the line and he rocketed by using a slide job in turn 1 to take the lead.

Marks and Abreu followed by for second and third as Wagner was suffering from a mechanical issue after making contact with a lap car.

For the next three laps, Marks and Abreu stayed within striking distance and when Larson got caught up in lap traffic on lap 13, Marks capitalized and he pulled even with Larson down the backstretch. The two race side by side through turn three and four and Marks got credit for the led lap by a nose.

However, Larson was not to be denied and he got back around Marks exiting turn two to re-take the lead on lap 14. Over the next ten laps, Larson raced through lap traffic with a sense of urgency and he held a nearly 1.2 second advantage on lap 24.

Danny Dietrich, who suffered motor issues all night had climbed inside the top ten from the 21st starting spot, brought out the caution when he came to a stop in turn one on lap 25. This allowed Marks and Abreu to try and make a move.

However Larson was just too good and he quickly sped away at the green flag while Marks and Abreu duked it out for second.

The final caution of the evening flew with one lap to go when Anthony Macri slowed on the front stretch , thus guaranteeing a new winner for the first time in four races and giving Marks and Abreu one last shot.

When the green flag flew, showing he would not be denied, Larson jumped out to a sizeable advantage. Ultimately he crossed under the checkered flag with an advantage of 1.556 second over Marks, Abreu, Brock Zearfoss and Lance Dewease.

"What an amazing racecar! I had so much grip out there by myself on those restarts that I could just run off the cushion a bit and keep good throttle," said Larson. "It’s been a long week but it was really cool and worth it to win this championship and close it out with a win here too."

For Marks he was resigned to the fact that Larson was the better car, but believes his team is set up for multiple wins in the future.

"Those guys are really tough right now and he is one heck of a driver," said Marks. "We have a really fast racecar and I think we only finished outside the top ten one time all week. So to compete against competition like Kyle and hold our own, it says we are pretty close."

Jason Miller and Nick Dickson led the field to the green flag with Miller getting the early jump on the field. However, Dickson got a run on the bottom of the speedway exiting turn four to lead lap one by a nose.

Sixth starter Flinner was on the move early and he moved into the third position by lap two. He was challenging Miller for second on the outside of the speedway when the caution came out for Dillan Stake on the backstretch.

On the restart, Flinner once again got a run on the top of the track in turns one and two, when Miller slid up in front of him and the two made contact. Miller got turned around to bring out the caution. He would rejoin the field.

On the restart Flinner used momentum off the top off the speedway to pull even with Dickson coming out of turn four and he led lap four my a car-length.

Meanwhile Eckert, who started ninth, was starting to make his presence known. He was fifth on the restart and by lap five he made a pass for third on the backstretch and followed it up by taking second from Dickson on the front stretch.

Eckert took a peak to the bottom of Flinner on lap nine, but could not complete the pass. Over the next eight laps ,Eckert remained steady on his line. He was trailing by .5 seconds when Flinner jumped the curb and got into the outside guardrail, allowing Eckert to make the pass for the lead.

Over the remaining eight laps, Eckert went untouched and he crossed under the checkered flag by a margin of 5.180 seconds over Flinner, Haus, Covert and Yoder. Kyle Lee, Dickson, Jim Yoder, Kyle Knapp and Trevor Feathers completed the top 10.

"Colton does a really good job up there on the cushion and he drives it hard," said Eckert. "I didn’t think I could c]pass him without him making a mistake so I just tried to stay as close as I could and hope for an opportunity."

Flinner said that his car was starting to lose grip towards the end of the race and that he was happy with the second place finish.

"The second half of the race I was really holding on as much as I could," said Flinner. "It just didn’t happen tonight and that's ok. We’ll be back again and try to end up one spot better."