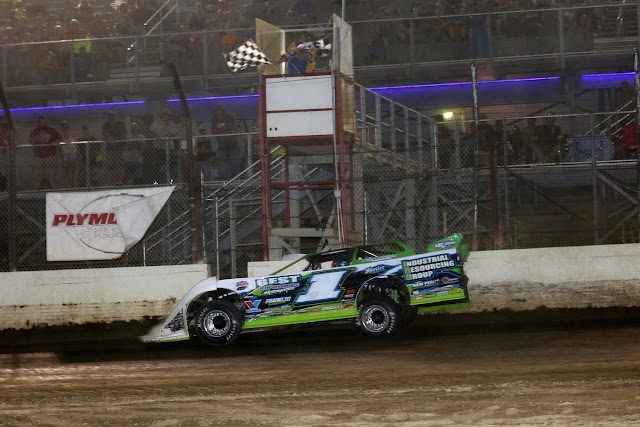 PLYMOUTH, IN – July 14, 2020 – The gap was over three years between his first and second DIRTcar Summer Nationals victories, but it took him just six days to win his third.

Tyler Erb led all 40 laps en route to a $5,000 victory Tuesday night at Plymouth Speedway – his third career Summer Nationals victory and second on the 2020 tour.

Lining up on the outside pole beside Bobby Pierce, a reverse of last Wednesday’s front row at the Brownstown Speedway in which Erb was victorious, Terbo jumped out to the early lead after a botched original start that saw Pierce go spinning in Turn 2, collecting Rusty Schlenk.

“I didn’t mean to get into Bobby there,” Erb said of the incident in Victory Lane. “I really thought he was going to drive in and slide across my nose there at the start. He kinda parked as I parked. I barely hooked him there, so that was my bad on that part.”

Pierce, of Oakwood, IL, was able to rejoin the field in his original starting spot, and the green flag waved once again. Erb, of New Waverly, TX, soon led the head of the field into lapped traffic and was slicing through rapidly with Pierce and Frank Heckenast Jr. following closely.

Pierce gave up the second spot to Heckenast, of Frankfort, IL, on Lap 23 after a brief scrub of the outside Turn 2 wall, but soon found himself inheriting the spot back after a restart on Lap 27.

Pierce attempted a big slide job on Heckenast in Turns 1-2, but the two ended up coming together, leaving Heckenast stopped in the outside wall and bringing out another caution. Heckenast needed the hook back to the pits as Pierce inherited the runner-up spot for the final restart.

Three-time and defending champion Brian Shirley got a big jump on the ensuing restart, took second away from Pierce and held it through the final 13 laps as Erb cruised across the finish line for his first Hell Tour victory at the Plymouth Speedway.

“I was excited those last 10 laps. I knew [Shirley] was beneath me and I was just trying to stay as smooth as I could. Man, this [track] was slick tonight, it didn’t rubber, so hats off to Plymouth Speedway,” Erb said.

Devin Moran rounded out the podium with the Hard Charger of the race, Jason Feger, right behind him in fourth. Feger was smooth all race long, as he made several passes on his way up from 16th on the starting grid. Kyle Bronson completed the top-five while Pierce slipped back a bit, settling for sixth at the checkers.

The DIRTcar Summer Nationals action continues Thursday, July 16 at Spoon River Speedway with another 40-lap, $5,000-to-win Feature, live on DIRTVision presented by Drydene. The tour’s visit to LaSalle Speedway, originally scheduled for Wednesday, July 15, has been postponed due to impending inclement weather. A reschedule date will be announced when determined.

Four races in, and the defending champ is already at it again.

Nick Hoffman cooked up some Modified magic Tuesday night at the Plymouth Speedway, mastering the slick surface over 25 laps to collect $1,500 and the first DIRTcar Summit Racing Equipment Modified Nationals win of his 2020 campaign.

Coming from his fifth-place starting spot, Hoffman, of Mooresville, NC, worked the low groove in the opening laps but was unable to gain any track position before the race’s first caution on Lap 5. But that all changed with a single, eye-opening move he made on the restart.

Hoffman cut to the inside groove in Turns 1-2 after riding the top off Turn 4 on the restart, got a great bite off corner exit and drag raced leader Curt Spalding into Turn 3. His initial attempt at the pass was unsuccessful, but his second was not. Hoffman came back at Spalding on Lap 10 with a slider in Turns 1-2 and made it stick, despite Spalding’s counter back to the inside.

From that point forth, it was all Hoffman out front. He went virtually unchallenged back to the stripe to collect his 27th career Summit Modifieds victory and first of 2020 behind the wheel of the Justin Allgaier-owned #7 Elite Chassis.

“I just had to get aggressive there on that restart, going from fifth to second, then I was able to slide Curt [Spalding] for the lead there,” Hoffman said in Victory Lane. “Car was really good, made some changes throughout the night and got better. Obviously, the track came to me like this, it got slick. As a driver, it just gets better.”

The JHA Motorsports entry of Will Krup held strong for his first podium finish of the 2020 campaign in second. Fifteen-year-old Summit Modified talent Hunt Gossum came into the evening as the tour points leader and backed his strong recent finishes up with yet another Tuesday night, coming from 11th to finish third. Derek Losh crossed the line in fourth while two-time Summit Modifieds winner this season Mike McKinney rounded out the top-five.

The DIRTcar Summit Racing Equipment Modified Nationals action continues Thursday night from the Spoon River Speedway in Canton, IL. Catch all the action live on DIRTVision. The tour’s visit to LaSalle Speedway, originally scheduled for Wednesday, July 15, has been postponed due to impending inclement weather. A reschedule date will be announced when determined.