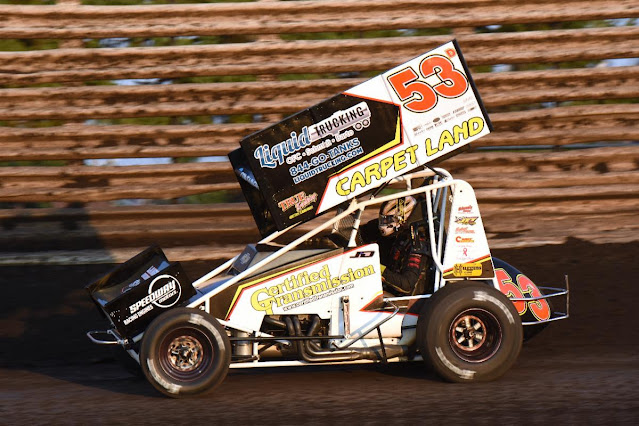 Inside Line Promotions - GREENWOOD, Neb. (Sept. 16, 2020) - Jack Dover captured his first top-10 result of the season with the Lucas Oil ASCS National Tour last Saturday during the Casey's General Store Midwest Fall Brawl at I-80 Speedway.
Dover's sixth-place run gives him at least one top 10 in each of the last 15 years with the series.
"I'm pretty pleased," he said. "To run sixth with that group is pretty good. We're happy with how it went."
Dover started the event, which was also sanctioned by the Carpet Land Nebraska 360 Sprints, by rallying from fourth to win a heat race.
"We got a good start and went into turns one and two through the middle," he said. "I had the lead coming out of turn two. We went into turns three and four and a car spun out so we went to a complete restart. That moved me to the front row outside. We took the lead right away. Sam Hafertepe Jr. got to me and we battled it out for a few laps. We switched our line up, running the middle of the track, and we won."
Dover followed the heat race performance by advancing from fifth to second place in a qualifier.
"We had a good start again and were next to third place at the start/finish line," he said. "We went into turns one and two and were in second. At that point with a guy like (Austin) McCarl in front of you it's hard to get to him, especially when he's in clean air. We kinda rode in second. I didn't press the issue. I figured we were pretty good in points."
Dover ranked third in event points to garner the third starting position for the main event.
"In the feature we rode around in fourth place most of the race," he said. "The last couple of restarts I made a mistake and went to the bottom each time. It just wasn't the place to be."
Dover's sixth-place outing was his 19th top 10 of the season.
Next up is a two-day show at Huset's Speedway in Brandon, S.D., this Friday and Saturday for the DeKalb/Asgrow Power Series Nationals presented by Casey's General Stores featuring the Midwest Sprint Touring Series and the Midwest Power Series. Dover swept a two-day event at the track earlier this month.
"We're really excited," he said. "We had a good weekend there two weeks ago. We know what we have to do to make the car a little better. I think we have a top-three car going into the weekend. My confidence is high, but I'm trying to keep a cool head."
QUICK RESULTS -
Sept. 12 - I-80 Speedway in Greenwood, Neb. - Heat race: 1 (4); Qualifier: 2 (5); Feature: 6 (3).
SEASON STATS -
24 races, 8 wins, 16 top fives, 19 top 10s, 20 top 15s, 20 top 20s
UP NEXT -
Friday and Saturday at Huset's Speedway in Brandon, S.D., for the DeKalb/Asgrow Power Series Nationals presented by Casey's General Stores featuring the Midwest Sprint Touring Series and the Midwest Power Series
MEDIA LINKS -
Website: http://www.JackDoverRacing.com
Twitter: https://twitter.com/JackDoverRacing
Facebook: https://www.facebook.com/jackdoverracing?fref=ts
SPONSOR SPOTLIGHT - Speedway Engines
Speedway Engines builds and repairs racing engines for a variety of racing divisions. For more information, visit https://www.speedwaymotors.com/ .
"Speedway builds reliable engines with great horsepower," Dover said. "I've had a long friendship with Zach Woods, who is a head guy of the engine shop. Zach and the team have helped my racing program reach new heights. They do modified motors, late model motors, really any type of motors so they don't just specialize in sprint car stuff."
Dover would also like to thank Liquid Trucking, Carpet Land, Certified Transmission, SSS Motorsports, Backlund Plumbing, Husker Diesel, True Trucking, Speedway Graphics, Thorpe's Body Shop, Volvo Trucks of Omaha, Spike Chassis, Sway Away, ButlerBuilt Professional Seat Systems, Keizer Aluminum Wheels, Schoenfeld Headers, Langfeldt Overhead Doors, K&N Filters, FK Rod Ends, DMI, Vortex Wings, Speedway Motors, Ostransky Farms, R&G Services and Industrial Plating for their continued support.
INSIDE LINE PROMOTIONS -
Inside Line Promotions specializes in affordable public relations and media management for motor sports drivers, teams, sponsors, tracks, series, events, organizations and manufacturers. ILP Founder Shawn Miller leverages professional journalism with new media technologies and social networking to improve your exposure and the return on investment for your sponsors.
To meet the media relations needs of your program by joining Team ILP, contact Shawn at 541-510-3663 or Shawn@InsideLinePromotions.com . For more information on Inside Line Promotions, visit http://www.InsideLinePromotions.com.
*PHOTO BY PAUL ARCH*
Posted by Bill McIntyre at Thursday, September 17, 2020