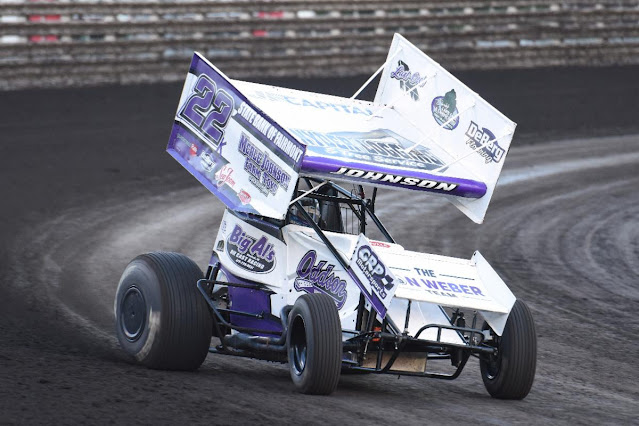 Inside Line Promotions - SIOUX FALLS, S.D. (Sept. 28, 2020) - Kaleb Johnson enjoyed a successful - albeit shorter than scheduled - rookie season in 360ci sprint car competition.
The 23-year-old handily won the Rookie of the Year Award at Knoxville Raceway, where he finished ninth in the championship standings. He also placed fifth in the Midwest Power Series standings.
"I thought our year went pretty well overall, especially considering that we changed our plans kind of at the last minute to race weekly at Knoxville because of restrictions on racing in Minnesota due to COVID-19," said Johnson, whose schedule of more than 30 races was pared to 19 nights of competition primarily because of cancellations due to the virus. "We raced against really strong competition, which is what we like to do because we feel it makes us better. I feel we improved as the season went along."
Highlights of Johnson's season included a top-five finish at Knoxville Raceway and a late-season runner-up result during the Jerry Richert Memorial at Cedar Lake Speedway in New Richmond, Wis.
"Our first top five at Knoxville was a big moment for us," he said. "We found out the first few nights there how tough the competition is at Knoxville, especially when you have little experience there compared to the regulars who've raced there for years. That night helped our confidence in knowing that we could compete there.
"It was also nice to finish second against some good competition at Cedar Lake, which is another track where we haven't raced much. The only driver to beat us was Justin Henderson, who dominated the Midwest Power Series this year."
Johnson was in contention for a top-five finish in the Knoxville Raceway standings before he competed against stout fields of competitors that averaged around 40 cars per night in the closing races.
"Our last races at Knoxville kind of left me with a bad taste in my mouth," he said. "We didn't make the A Main the last two nights and that dropped us quite a bit in points. Our 360 Nationals didn't go as well as we hoped either.
"We were proud to finish fifth in points with the MPS. Greg Parent has put together a great series with good competition and we enjoyed competing in it.
"I was especially proud of our team. We're young and still learning, but we learned a lot this year and continued to improve. I have a lot of confidence in us going forward."
Johnson is already anticipating the 2021 racing season and hopes to announce his racing plans before the end of this year.
"I'm really looking forward to next year," he said. "We're hoping to make an announcement in the next couple of months regarding our plans."
SEASON STATS -
19 races, 0 wins, 4 top fives, 8 top 10s, 11 top 15s, 14 top 20s
MEDIA LINKS -
Website: http://www.kalebjohnsonracing.com/
Twitter: https://twitter.com/Kaleb___Johnson
Facebook: https://www.facebook.com/KalebJohnsonRacing22
SPONSOR SPOTLIGHT - JF Financial
JF Financial is a private financial group located in the Minneapolis area.
"JF Financial joined our team two years ago," Johnson said. "We're excited to have them back again this year and we greatly appreciate their support."
Johnson would also like to thank Merle Johnson Farm Toys, GRP Motorsports, Oddson Underground, Snyder Tree Service, State Bank of Fairmont, Sea Foam, Schaeffer's Oil, Hepfner Racing Products, DeBerg Concrete, Big Al's Diecasts, The Ron Weber Team, DeBerg Flooring, Guaranteed Rate - Mike Brudigan Home Loans, Dave's Lawn Care & Landscaping, Triple M Trucking, Last Deck and Marthaler Dodge for their continued support.
INSIDE LINE PROMOTIONS -
Inside Line Promotions specializes in affordable public relations and media management for motor sports drivers, teams, sponsors, tracks, series, events, organizations and manufacturers. ILP Founder Shawn Miller leverages professional journalism with new media technologies and social networking to improve your exposure and the return on investment for your sponsors.
To meet the media relations needs of your program by joining Team ILP, contact Shawn at 541-510-3663 or Shawn@InsideLinePromotions.com . For more information on Inside Line Promotions, visit http://www.InsideLinePromotions.com.
*PHOTO BY PAUL ARCH*
Posted by Bill McIntyre at Tuesday, September 29, 2020