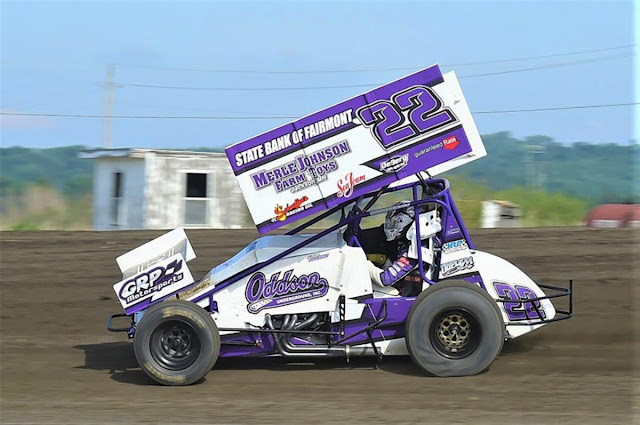 Inside Line Promotions - NEW RICHMOND, Wis. (Sept. 14, 2020) - Kaleb Johnson equaled his career-best finish in a 360ci sprint car with a second-place run during the 20th annual Jerry Richert Memorial last Saturday at Cedar Lake Speedway.
"We had a pretty good night," said Johnson, who also finished second at Cedar Lake Speedway two years ago. "Our car ran well and we had a little luck, which also helps. I knew it would be tough to beat Justin Henderson. I was behind him on the last restart when I spun my tires and he pulled away."
Johnson's evening got off to a good start when he drew the pole starting position for his Midwest Power Series heat race, which was delayed briefly due to a light drizzle and reworking of the track.
"The track was still pretty tacky from the rain," he said. "I was able to get the lead at the start. I knew Justin would probably challenge me and he got pretty close, but I was able to get the win."
Johnson drew the fourth starting position for the 22-car A Main.
"I battled for third and fourth for the first five or six laps," he said. "There were a lot of cautions and a couple of red flags. But then there was a stretch of about 10 to 15 laps toward the end where we were able to have a long green-flag run.
"I tried to run the bottom for about the first half of the race and that seemed to go okay. But then Justin and Brooke (Tatnell) were in front of me and battling up top. I figured that was probably where I should be so I moved up.
"We got into pretty heavy traffic when there was a caution with about four laps to go. That played into my favor because my car was getting really tight from the dirty air from the traffic. I hit the wall once. We moved up to second when Brooke broke an oil line and pulled in during that caution. I had a fun battle with Jody Rosenboom at the end. He passed me on the bottom for second coming to the white flag. My car was a little better up top in turns one and two and I was able to sneak by him going down the backstretch and then took his line away in turns three and four."
Johnson expects to close out his 2020 racing season this Friday and Saturday at Huset's Speedway in Brandon, S.D., during the DeKalb/Asgrow Power Series Nationals presented by Casey's General Stores featuring the Midwest Sprint Touring Series and the Midwest Power Series.
"I'm excited to return to Huset's, especially after we raced well there a couple of weeks ago," he said. "There will be a lot more cars there this time and a lot more money on the line, too. It should be fun."
QUICK RESULTS -
Sept. 12 - Cedar Lake Speedway in New Richmond, Wis. - Heat race: 1 (1); Feature: 2 (4).
SEASON STATS -
17 races, 0 wins, 4 top fives, 7 top 10s, 10 top 15s, 13 top 20s
UP NEXT -
Friday and Saturday at Huset's Speedway in Brandon, S.D., for the DeKalb/Asgrow Power Series Nationals presented by Casey's General Stores featuring the Midwest Sprint Touring Series and the Midwest Power Series
MEDIA LINKS -
Website: http://www.kalebjohnsonracing.com/
Twitter: https://twitter.com/Kaleb___Johnson
Facebook: https://www.facebook.com/KalebJohnsonRacing22
SPONSOR SPOTLIGHT - Hepfner Racing Products
Hepfner Racing Products offers a large variety of items for virtually every form of motorsports. HRP is proud to design, manufacture, package and ship all of their products from their Hartford, Wis., facility. For more information, visit http://www.hrpracing.com/.
"We've been running HRP wings for the last three years and we're also buying other products from them now," Johnson said. "They treat us really well and I wouldn't use any other wing."
Johnson would also like to thank Merle Johnson Farm Toys, GRP Motorsports, Oddson Underground, JF Capital, Snyder Tree Service, State Bank of Fairmont, Sea Foam, Schaeffer's Oil, DeBerg Concrete, Big Al's Diecasts, The Ron Weber Team, DeBerg Flooring, Guaranteed Rate - Mike Brudigan Home Loans, Dave's Lawn Care & Landscaping, Triple M Trucking, Last Deck and Marthaler Dodge for their continued support.
INSIDE LINE PROMOTIONS -
Inside Line Promotions specializes in affordable public relations and media management for motor sports drivers, teams, sponsors, tracks, series, events, organizations and manufacturers. ILP Founder Shawn Miller leverages professional journalism with new media technologies and social networking to improve your exposure and the return on investment for your sponsors.
To meet the media relations needs of your program by joining Team ILP, contact Shawn at 541-510-3663 or Shawn@InsideLinePromotions.com . For more information on Inside Line Promotions, visit http://www.InsideLinePromotions.com.
*PHOTO BY ROB KOCAK PHOTOS*
Posted by Bill McIntyre at Tuesday, September 15, 2020