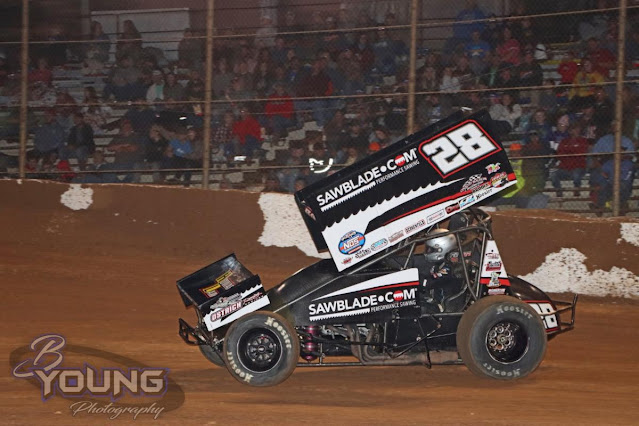 Inside Line Promotions - LITTLE ROCK, Ark. (Oct. 6, 2020) - Scott Bogucki scored his career-best result during the famed Short Track Nationals last Saturday, posting a ninth-place outing at I-30 Speedway.
The SawBlade.com sponsored driver was efficient throughout the 33 rd annual COMP Cams Short Track Nationals presented by Hoosier Tires, which featured more than 75 drivers. Bogucki kicked off the Lucas Oil ASCS National Tour event by advancing from fifth to third place in a heat race before he won a qualifier on Friday. Bogucki ranked fourth in points to line up on the outside of the second row for the main event.
"It's the best I've ever been there," he said. "We could have won the first night. I got through the cushion. A panel smashed in and a huge clump of clay and the panel hug the throttle wide open. I made about two laps, but I wasn't making good laps and Mark Smith got by me. Luckily, there was a red flag and I hit the (kill) switch. I unhooked the throttle during the stoppage. An official came over and told me we were losing coolant. We had also knocked a hole in the radiator so that ended our night. It was kind of heartbreaking."
Bogucki, who was in contention for at least a podium run, was credited with a 12th-place result.
The event wrapped up on Saturday. Bogucki won a heat race from third and he maneuvered from sixth to fifth place in a qualifier. That relegated him to the pole of a B Main, which he won to transfer into the main event.
"I wasn't very good in the qualifier so we had to start on the front of a B Main and we transferred through into the main event," he said. "The track was rubber so you had to wait for someone to mess up. I think we got up to seventh at one point before finishing ninth. I was happy overall."
Bogucki gained a handful of positions before ending ninth, which was his 17 th top 10 of the season and ninth during ASCS National Tour competition.
"It was a really good night to get points," he said. "We're gearing up to have another solid weekend in two weeks when we end the ASCS National Tour season at Devil's Bowl."
Bogucki, who has climbed to third in the ASCS National Tour championship standings, will take this weekend off before wrapping up the ASCS National Tour season on Oct. 16-17 at Devil's Bowl Speedway in Mesquite, Texas, during the 47th annual Winter Nationals.
QUICK RESULTS -
Oct. 2 - I-30 Speedway in Little Rock, Ark. - Heat race: 3 (5); Qualifier: 1 (2); Feature: 12 (4).
Oct. 3 - I-30 Speedway in Little Rock, Ark. - Heat race: 1 (3); Qualifier: 5 (6); B Main: 1 (1); Feature: 9 (13).
SEASON STATS -
31 races, 1 win, 8 top fives, 17 top 10s, 20 top 15s, 24 top 20s
UP NEXT -
Oct. 16-17 at Devil's Bowl Speedway in Mesquite, Texas, for the 47 th annual Winter Nationals with the Lucas Oil ASCS National Tour
MEDIA LINKS -
Website: http://www.SawBlade.com
Twitter: https://twitter.com/SawBladecom
Facebook: https://www.facebook.com/SawBladecom
Instagram: https://www.instagram.com/sawblade.com_
SPONSOR SPOTLIGHT - SawBlade.com
SawBlade.com, which is located in Houston, Texas, is redefining the way industrial, hardware and home use band saw blades are made and distributed. For more information, visit http://www.SawBlade.com. Additionally, SawBlade.com is the official saw blade of the American Sprint Car Series and the title sponsor of every ASCS National Tour main event as well as the Victory Lane sponsor.
"Everyone at SawBlade.com has been very supportive," Bogucki said. "They have stuck with me for three years as we've continued to build our race team and develop into a consistent contender. I appreciate their loyalty and support."
Bogucki would also like to thank Dissolvalloy, Ostrich Race Engines, KW Motorsports, Smith Titanium, Rod End Supply, Weld Wheels, JJS Mechanical Inc., HRP Wings, Momentum Suspension, KW Transport, Pac Torsion Bars, Maxim Chassis, Weld Wheels, JJS Mechanical Inc., Momentum Suspension, Howard Law and Findley and Sons for their support.
INSIDE LINE PROMOTIONS -
Inside Line Promotions specializes in affordable public relations and media management for motor sports drivers, teams, sponsors, tracks, series, events, organizations and manufacturers. ILP Founder Shawn Miller leverages professional journalism with new media technologies and social networking to improve your exposure and the return on investment for your sponsors.
To meet the media relations needs of your program by joining Team ILP, contact Shawn at 541-510-3663 or Shawn@InsideLinePromotions.com. For more information on Inside Line Promotions, visit http://www.InsideLinePromotions.com.
*PHOTO BY B YOUNG PHOTOGRAPHY*
Posted by Bill McIntyre at Wednesday, October 07, 2020