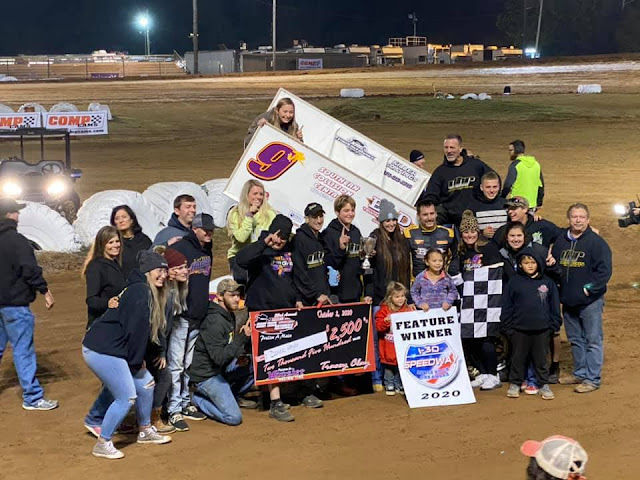 Inside Line Promotions - LITTLE ROCK, Ark. (Oct. 6, 2020) - Derek Hagar captured the Short Track Nationals preliminary night for the second straight year last Friday at I-30 Speedway.
He followed that up by producing a career-best runner-up result during the finale of the 33rd annual COMP Cams Short Track Nationals presented by Hoosier Tires on Saturday at I-30 Speedway.
"I think next year is going to be even better," he said. "We're building a lot of momentum not just for the Short Track Nationals but next season as a whole. We're getting a cushion to work with to update our program to get not only a second motor but hopefully a third."
Hagar was one of 75-plus drivers to tackle the two-day Lucas Oil ASCS National Tour event. He kicked off the action on Friday by maneuvering from fourth to second place in both a heat race and a qualifier. That gave him the most points and the pole position for the 25-lap main event.
"We had a decent pill draw that put us on the second row outside in the sixth heat race," he said. "We were able to get up to second and hold onto second. For the qualifier we had a good run and I felt faster than Blake Hahn. Right when I got past him for the lead we had a red flag. He took my line on the restart so we settled for second. That gave us enough points to be on the pole for the feature. You had to be on top of your race car because if you weren't it'd take control. The cushion was pretty gnarly on the entry of both corners. It took forever to get the feature started. Once we got going I wasn't challenged too much. I found a line on the bottom of turns three and four that worked good for me."
Hagar led the distance for his eighth victory of the season and his first ASCS National Tour triumph since September 2014.
"It's been awhile," he said. "We know our team is good and we can compete with the best of them. We just don't have the opportunity to go out and do it a lot. It does make us feel good to be competitive and win races when we compete with the ASCS National Tour drivers."
The strong weekend continued on Saturday as Hagar won a heat race from the pole and a qualifier from third. He placed third in the dash to line up on the inside of the second row for the A Main.
"We got a good start and led every lap of the heat race," he said. "We won the qualifier and that put us second in points. I drew the No. 3 for the dash and finished third. We felt a little bit of rubber go down. We anticipated it would get locked down for the feature. We were way too free the whole race. I was just holding on. I got up to second late in the race. It was a good run, but it was disheartening knowing we had a fast car all weekend."
Hagar's runner-up result was his 11th podium of the season and his third second-place showing.
He plans on returning to action this Friday and Saturday at Riverside International Speedway in West Memphis, Ark., with the USCS Series.
QUICK RESULTS -
Oct. 2 - I-30 Speedway in Little Rock, Ark. - Heat race: 2 (4); Qualifier: 2 (4); Feature: 1 (1).
Oct. 3 - I-30 Speedway in Little Rock, Ark. - Heat race: 1 (1); Qualifier: 1 (3); Dash: 3 (3); Feature: 2 (3).
SEASON STATS -
20 races, 8 wins, 13 top fives, 17 top 10s, 17 top 15s, 20 top 20s
UP NEXT -
Friday and Saturday at Riverside International Speedway in West Memphis, Ark., with the USCS Series
MEDIA LINKS -
Website: http://www.DerekHagarRacing.com
Twitter: https://twitter.com/HagarDerek
SPONSOR SPOTLIGHT - FK Rod Ends
From the wilds of Baja, Mexico, to the "Good Ole Boys" of NASCAR, from mowers to fitness equipment, FK Rod Ends is there with an evolving program designed to supply rod end products to users everywhere. For more information, visit http://www.FKRodEnds.com.
"Maria and the crew at FK Rod Ends are awesome to work with," Hagar said. "They take pride in their products and that's why we choose to run FK Rod Ends."
Hagar would like to thank B&D Towing and Recovery, J&J Auto Racing, Dynotech Performance, Summit Truck Group, Fragola Performance Systems, Killer Coatings, Petra Construction, Administrative Consulting Services, Hedger Brothers Ready Mix, Xtreme Race Graphics, Southern Collision Centre, Jeff's Heating and Cooling, ButlerBuilt Professional Seat Systems, Weld Wheels, DHR Suspension, Hinchman Racewear, Wix Filters, Wings Unlimited, Valvoline and Ti64 for their continued support.
INSIDE LINE PROMOTIONS -
Inside Line Promotions specializes in affordable public relations and media management for motor sports drivers, teams, sponsors, tracks, series, events, organizations and manufacturers. ILP Founder Shawn Miller leverages professional journalism with new media technologies and social networking to improve your exposure and the return on investment for your sponsors.
To meet the media relations needs of your program by joining Team ILP, contact Shawn at 541-510-3663 or Shawn@InsideLinePromotions.com . For more information on Inside Line Promotions, visit http://www.InsideLinePromotions.com.
*PHOTO BY B YOUNG PHOTOGRAPHY*
Posted by Bill McIntyre at Wednesday, October 07, 2020