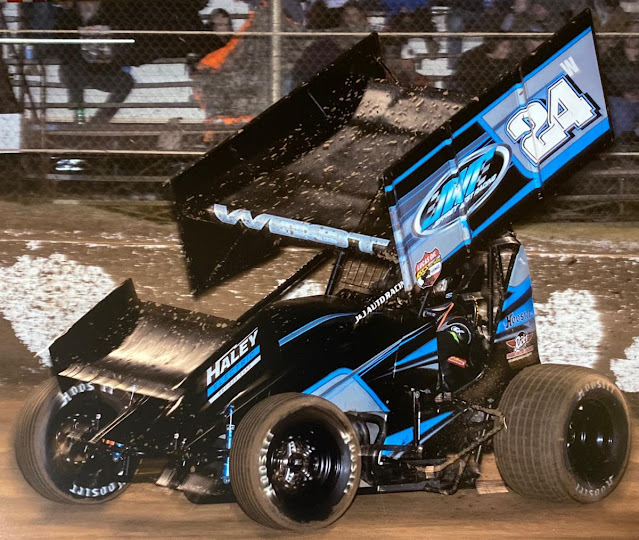 Inside Line Promotions - LITTLE ROCK, Ark. (Oct. 6, 2020) - Jeffrey West Jr. earned his second career Lucas Oil ASCS National Tour heat race victory on Saturday to kick off the 33rd annual COMP Cams Short Track Nationals presented by Hoosier Tires finale at I-30 Speedway.
West Jr. maintained the top spot from his pole position, which marked his third heat race win during his rookie season in a 360ci winged sprint car.
"The heat race win was awesome," he said. "We had the car dialed in perfectly for that. I could drive it how I wanted to. That was a big statement to show that we're there to compete and we can hang with the big boys, especially for my first year in a 360. That was huge even though it's just a heat race."
A sixth-place finish in a qualifier was followed by an 11th -place result in a B Main.
"In the qualifier we started third and I stayed in third the first five laps," he said. "Then we had a caution halfway. I guess the air pressure bled off too much. The handling went away after that and we faded toward the end. And then in the B Main the track was really slick and on the edge of fixing to rubber up. It ended up rubbering up in the middle of that B Main. The car wasn't exactly right for that so that was the main deal. Overall, I was still happy."
The two-day event, which featured more than 75 drivers, began on Friday with West Jr. finishing third in a heat race. He then advanced from eighth to sixth place in a qualifier, which lined him up on the outside of the second row for a B Main.
"I was able to finish third and hold our position in the heat race," he said. "The track was hammer-down fast. It made it difficult to pass because everyone is pretty much wide open. I was happy to finish third, racing against the best in the country. The car was decent in the qualifier. As the track faded off a little bit we lost a little with the setup. Then in the B Main I hit a big hole in turn one on the start. That sent me flying off the track. I had to restart back in 16th or 17th. I think if that wouldn't have happened that race goes a little different and maybe I could have passed someone to get into a transfer. Overall, I was happy with Friday."
West Jr. rallied from the back of the pack following the early incident to post a ninth-place finish.
Another bit of bright news coming out of the event, which was also sanctioned by the ASCS Mid-South Region, is that West Jr. finished third in the ASCS Mid-South Region championship standings and he won the Rookie of the Year Award.
He plans to take that momentum into a two-day USCS Series event at Riverside International Speedway in West Memphis, Ark., this Friday and Saturday.
"I feel really good going into this weekend," he said. "We've been fast there all year. We've raced there a bit so I feel confident."
QUICK RESULTS -
Oct. 2 - I-30 Speedway in Little Rock, Ark. - Heat race: 3 (3); Qualifier: 6 (8); B Main: 9 (4).
Oct. 3 - I-30 Speedway in Little Rock, Ark. - Heat race: 1 (1); Qualifier: 6 (3); B Main: 11 (7).
SEASON STATS -
12 races, 0 wins, 0 top fives, 3 top 10s, 7 top 15s, 9 top 20s
UP NEXT -
Friday and Saturday at Riverside International Speedway in West Memphis, Ark., with the USCS Series
MEDIA LINKS -
Facebook: https://www.facebook.com/jeffreywestracing/
SPONSOR SPOTLIGHT - Haley Electric
Haley Electric provides electrical work on residential and commercial properties throughout Memphis, Tenn., and the surrounding area. For more information, visit https://rhaleyelectrictn.com/.
"I'm happy to have Haley Electric on board," West Jr. said. "They provide one of the best commercial and residential services in the Mid-South."
West Jr. would like to thank Mainline Safety and Supply, Inc., Flashe Graphics, Rick's Powder Coating and Jeff and Kim West for their continued support.
INSIDE LINE PROMOTIONS -
Inside Line Promotions specializes in affordable public relations and media management for motor sports drivers, teams, sponsors, tracks, series, events, organizations and manufacturers. ILP Founder Shawn Miller leverages professional journalism with new media technologies and social networking to improve your exposure and the return on investment for your sponsors.
To meet the media relations needs of your program by joining Team ILP, contact Shawn at 541-510-3663 or Shawn@InsideLinePromotions.com . For more information on Inside Line Promotions, visit http://www.InsideLinePromotions.com.
*PHOTO BY TIM AYLWIN PHOTOGRAPHY*
Posted by Bill McIntyre at Wednesday, October 07, 2020