WHAT TO WATCH FOR: Outlaws, Posse Face Off Again At Port Royal Close battles in the driver and team points continue into Nittany Showdown doubleheader 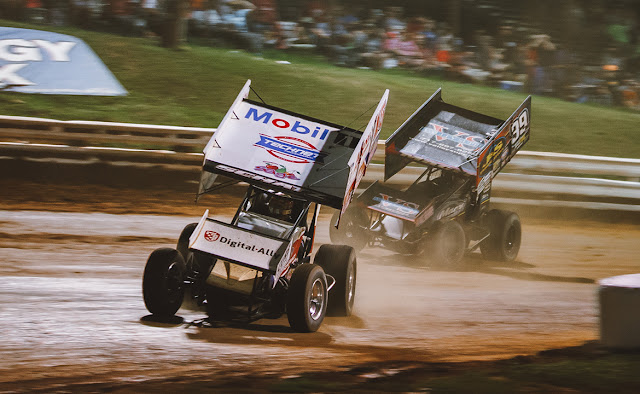 PORT ROYAL, PA — Oct. 5, 2020 — Pennsylvania will host the World of Outlaws NOS Energy Drink Sprint Car Series for the final time this year, Oct. 9-10, at Port Royal Speedway for the Nittany Showdown.
The doubleheader event is also the final round of the historic World of Outlaws versus PA Posse battle, which has been dominated by the Outlaws this season. And while that battle is for bragging rights only, a victory Friday night will pay $8,000 and then $15,000 Saturday night.
Port Royal will begin a seven-race stretch to determine the 2020 driver and team champions. Five drivers and six teams are still within reasonable striking distance of the titles with reigning champion Brad Sweet leading the driver title hunt and Jason Johnson Racing leading the team points battle.
If you can’t make it to the track, you can watch all of the action live on DIRTVision.
Here are the top storylines to follow this weekend:
SCHATZ FINDING SPEED: Ten-time World of Outlaws champion Donny Schatz, of Fargo, ND, and his Tony Stewart/Curb-Agajanian Racing team are slowly returning to their winning ways just in time to make a run at the 2020 title. He enters the Nittany Showdown having won the last three events at Port Royal and recently winning his sixth National Open title.
Sitting third in points, Schatz is now 70 points behind Brad Sweet for the points lead. A win this weekend would help him close that points gap for the second weekend in a row and would give him a career milestone. Schatz is one win away from securing 300 career World of Outlaws wins.
TITLE HUNTS NARROW: The National Open weekend at Williams Grove Speedway saw the race for the 2020 driver and team championships close in again.
Reigning champion Brad Sweet, of Grass Valley, CA, continues to lead the driver championship, but now by 38 points over second-place Logan Schuchart, of Hanover, PA. In the team championship battle, David Gravel, of Watertown, CT, helped propel Jason Johnson Racing to the points lead – currently eight points ahead of Sweet’s Kasey Kahne Racing team.
Sweet has one win at Port Royal – in 2015 – but finished 12th at the half-mile track last year. If he has another performance like that, it could leave the door open for Schuchart, who won at Port Royal in 2016 and finished fourth there last year, to gain on him again.
Gravel has yet to win at Port Royal but has been strong on half-mile tracks with JJR. He won twice at Knoxville Raceway and twice at Williams Grove Speedway.
ALLEN CONTINUES GROWTH: Jacob Allen, of Hanover, PA, is having a career season and continues to expand upon it. He finished seventh at the National Open last weekend, giving him his 17th top-10 finish of the season – tying his career best from last year.
He and his Shark Racing team will be after their first home state win together at Port Royal this weekend. He earned his career best finish of 16th at the track last year, but he’s proven this year that his past stats hold no weight on his performance this year. After earning his first career win at Dodge City Raceway Park, Allen has approached each event with a new level of confidence.
PITTMAN/HEFFNER EYE PA WIN: Daryn Pittman, of Owasso, OK, earned a home state win at Lawton Speedway last month and will have two final chances for the year to give Heffner Racing a home state win this weekend at Port Royal.
Pittman has yet to win at Port Royal, but he and Heffner Racing have proven to be a strong combination since rejoining forces two weeks ago. In five races, they’ve collected a third-place finish at Lernerville and three top-10s.
PA POSSE FACE SHUTOUT: For the first time since 2008, the PA Posse could be shutout off earning a World of Outlaws victory in their home territory. They haven’t won a Series event in their last nine attempts at a Pennsylvania track.
Their best chance at a victory this weekend at Port Royal maybe with one of their youngest members. Anthony Macri, of Dillsburg, PA, has eight wins at the speedway – seven of them coming this year. He finished second against the Outlaws at the track last year, closing in on Donny Schatz for the win late in the race.
Macri was the only Posse member to finish inside the top-10 in that event and he was the best finishing Posse at the National Open last weekend, finishing eighth.
THIS WEEK AT A GLANCE
WHEN & WHERE
Fri., Oct. 9 and Sat., Oct. 10 at Port Royal Speedway in Port Royal, PA. Event Info / Tickets
ABOUT THE TRACK
Port Royal Speedway is a semi-banked 1/2-mile track.
Online – PortRoyalSpeedway.com
Track Record – 15.168 sec. set by Lucas Wolfe on July 5, 2014
Posted by Bill McIntyre at Tuesday, October 06, 2020