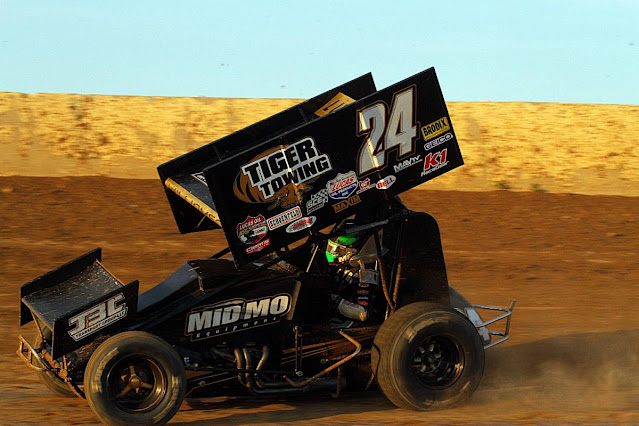 Inside Line Promotions - LITTLE ROCK, Ark. (Oct. 7, 2020) - Garet Williamson continues to impress in his rookie year with the Lucas Oil ASCS National Tour.
Over the last couple of months he's been able to compete with some of the heavy hitters with the traveling 360ci winged sprint car series. That means not only qualifying for A Mains, but also battling for top-10 and top-five finishes.
That continued in last weekend's 33rd annual COMP Cams Short Track Nationals presented by Hoosier Tires at I-30 Speedway. Williamson was fast throughout the two-day weekend, qualifying for both main events and coming away with a top-10 finish in Friday's opener.
"We are super pumped with our performance as a team," he said. "We were good all weekend, especially Friday. We had a super-fast car. Obviously, our luck wasn't very good, but other than that we had a fast car. The track surfaces were a little challenging, but we made the best of them and put it in the show. It was a really good weekend for us."
Williamson was making his first start in an event that is traditionally one of the toughest on the schedule. This year was no exception as 78 cars unloaded in the pit area looking for the $10,041 top prize on Saturday night.
Williamson started out strong by finishing third in his heat race and winning his qualifier on Friday. Things took a downward turn at the start of the feature when he suffered top wing damage from a car that flipped in front of him. Williamson went to the work area and got a new wing. After restarting at the rear, he charged up to a solid sixth-place finish.
"It shows a lot about our team," he said. "As soon as I rolled into the hot pit they were right there with a wing ready. I can't count the number of other teams there with wrenches to do whatever was needed to get me back on the track. It really shows how much of a family racing is. As a driver, that's pretty cool to see everyone come together to get me back on the track."
Williamson had plenty of momentum heading into Saturday night, but he was forced to come through the B Main to make the Short Track Nationals finale. After placing fourth in a heat race and third in a qualifier, Williamson recorded a third-place result in a B Main, which put him 18th in the main event.
The track rubbered up in a hurry and Williamson passed three cars to finish 15th.
"We've been super good and we've made some pretty big shows this year," he said. "So it's nice knowing that you have a fast car and can run with those guys. For our first year, it's pretty cool knowing that you can hang with those guys. It makes you feel better as a driver that you have the capability of going out and beating those guys."
Williamson gets another chance to shine on Oct. 16-17 when the Lucas Oil ASCS National Tour completes its 2020 season at Devil's Bowl Speedway in Mesquite, Texas, during the 47th annual Winter Nationals.
"We've had a pretty decent rookie year," Williamson said. "I wish we could've gotten more shows in, and I think we are going to go back to California after Devil's Bowl to hit a couple of shows. It's been a lot of fun, we learned a lot and I'm pumped. It's important to finish the season on a high note and it would be nice to end the (ASCS National Tour) year on the podium next week."
QUICK RESULTS -
Oct. 2 - I-30 Speedway in Little Rock, Ark. - Heat race: 3 (5); Qualifier: 1 (2); Feature: 6 (5).
Oct. 3 - I-30 Speedway in Little Rock, Ark. - Heat race: 4 (7); Qualifier: 3 (1); B Main: 3 (3); Feature: 15 (18).
SEASON STATS -
32 races, 3 wins, 7 top fives, 11 top 10s, 18 top 15s, 23 top 20s
UP NEXT -
Oct. 16-17 at Devil's Bowl Speedway in Mesquite, Texas, for the 47 th annual Winter Nationals with the Lucas Oil ASCS National Tour
MEDIA LINKS -
Twitter: https://twitter.com/garetw3
Facebook: https://www.facebook.com/Garet-Williamson-Racing-572353479787934/
SPONSORS -
Williamson would like to thank Mid-Mo Equipment, Lucas Oil Products, Sorrels Auto & Truck Parts, JBC Transport, LLC, Royal Power Sports, Mo State Construction, Schure Built Suspensions, Tiger Towing, Clems Signs and Maxim for their continued support.
INSIDE LINE PROMOTIONS -
Inside Line Promotions specializes in affordable public relations and media management for motor sports drivers, teams, sponsors, tracks, series, events, organizations and manufacturers. ILP Founder Shawn Miller leverages professional journalism with new media technologies and social networking to improve your exposure and the return on investment for your sponsors.
To meet the media relations needs of your program by joining Team ILP, contact Shawn at 541-510-3663 or Shawn@InsideLinePromotions.com . For more information on Inside Line Promotions, visit http://www.InsideLinePromotions.com.
*PHOTO BY RCM DESIGN*
Posted by Bill McIntyre at Thursday, October 08, 2020