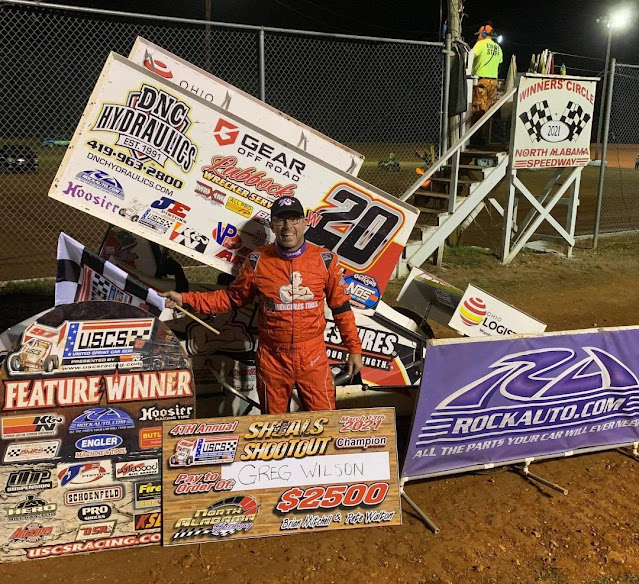 Inside Line Promotions - TUSCUMBIA, Ala. (March 16, 2021) - Greg Wilson is all smiles following a successful weekend.
The Hercules Tires, Ohio Logistics and DNC Hydraulics sponsored driver built confidence with a solid outing during a World of Outlaws NOS Energy Drink Sprint Car Series event on Friday before he won a USCS Series event on Saturday. It was his first feature triumph since March 2019.
The action began on Friday at Magnolia Motor Speedway in Columbus, Miss., where Wilson qualified 21st quickest and placed seventh in a heat race. That relegated him into the Last Chance Showdown. Wilson worked from fifth to second place in the consolation race to garner a transfer into the back of the main event. He continued to march forward in the feature by maneuvering from 22nd to 17th.
"Whenever you race with the best and that's your first night of the year with the 410 it was obviously challenging," he said. "The good part was that I think we're improving with our 410 program. We didn't time in great, but we weren't a mile away from being okay. As the night wore on and we kept changing our car around we got it really drivable. Our end result wasn't as good as we were. The tires we had planned on running in the A Main we used up earlier in the night. We ended up with some tires that weren't great for the feature, but that's all we had left. We were probably a top-10 car with the right tires, but I was okay with it because as a racer you feel and know those things about how good of a car you really had. It was a step forward."
Wilson ventured to North Alabama Speedway on Saturday for the 4 th annual USCS Shoals Shootout.
"We unloaded and were really good in hot laps," he said. "The best part is my oldest daughter told me all night long, 'Don't touch the race car because it looks really fast.' We listened. We didn't need to mess with it."
Wilson won his heat race after starting on the outside of the front row. The feature inversion lined him up on the outside of the second row for the A Main.
"There was no real gauge until we got to the feature and raced with Mark Smith," he said. "He's won everything. It had to be a heck of a race for the fans because I know it was from where I was sitting. The guys on the front row and Mark and I battled from first through fourth for the first half of the race. At one point I got into a guy running for second as we were racing hard and we about took each other out. Mark got around us and I thought, 'Man, that's the race.' You don't give a guy like that an opportunity to get out front. There were a couple of restarts and everything was falling wrong early in the race. Finally we got going long enough that I got to second. We started running Mark down and I knew we were close to the end of the race. In turns three and four I could see there was a little cushion up there. I changed lanes with a few laps to go. I got to his rear bumper and got around him. We were dicing in and around traffic. When you have a packed house and you race that hard, it's fun to be a part of. That was pretty cool."
Wilson's late-race pass gave him his first win since capturing a USCS Series event at North Alabama Speedway on March 23, 2019.
Wilson tentatively plans on racing this Friday and Saturday at Deep South Speedway in Loxley, Ala., during the USCS Gulf Coast Shootout with the USCS Series.
QUICK RESULTS -
March 12 - Magnolia Motor Speedway in Columbus, Miss. - Qualifying: 21; Heat race: 7 (6); B Main: 2 (5); Feature: 17 (22).
March 13 - North Alabama Speedway in Tuscumbia, Ala. - Heat race: 1 (2); Feature: 1 (4).
SEASON STATS -
8 races, 1 win, 2 top fives, 4 top 10s, 4 top 15s, 5 top 20s
UP NEXT -
Friday and Saturday at Deep South Speedway in Loxley, Ala., for the USCS Gulf Coast Shootout with the USCS Series
UPCOMING HERCULES TIRES DEALERSHIP VISITS -
TBD
MEDIA LINKS -
Website: http://www.GregWilsonRacing.com
Twitter: http://www.twitter.com/GregWilsonw20
Facebook: https://www.facebook.com/GregWilsonRacing
SPONSOR SPOTLIGHT - Magtech Ignition and Simpson Race Products
Magtech Ignition provides repair and upgrade services for all ignition needs. For more information, visit http://www.MagtechIgnition.com .
Simpson Race Products is an American motor sports parts business that supplies gloves, helmets, harness systems, driver's suits, head restraints, shoes and more ranging from racers at local tracks to international teams. For more information, visit http://www.SimpsonRaceProducts.com .
"Ed Starr of Magtech has become a good friend whom I met through Danny Smith several years ago," Wilson said. "He's taken care of our ignition stuff since then and we appreciate his support.
"Simpson Race Products has helped me for more than 20 years. I use their helmets, suits, shoes, gloves. I was thankful to have them involved after wrecking last weekend at Eldora."
Wilson would also like to thank Hercules Tires, Ohio Logistics, DNC Hydraulics, Gear Off Road, Kinsler Fuel Injection, All Pro Cylinder, Banshee Graphics, Lubbock Wrecker Service, Hepfner Racing Products, Nagy Equipment Sales, Winters Performance, Real Capz, Mark Wolford Garage, Burns Petroleum, Inter-State Truck Repair, ATL Fuel Cells, Sandridge Customs, Cooper Custom Powder and Benson Marketing for their continued support.
INSIDE LINE PROMOTIONS -
Inside Line Promotions specializes in affordable public relations and media management for motor sports drivers, teams, sponsors, tracks, series, events, organizations and manufacturers. ILP Founder Shawn Miller leverages professional journalism with new media technologies and social networking to improve your exposure and the return on investment for your sponsors.
To meet the media relations needs of your program by joining Team ILP, contact Shawn at 541-510-3663 or Shawn@InsideLinePromotions.com . For more information on Inside Line Promotions, visit http://www.InsideLinePromotions.com.
*PHOTO COURTESY OF USCS SERIES*
Posted by Bill McIntyre at Wednesday, March 17, 2021