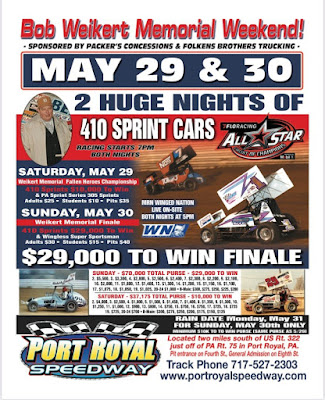 By Justin Snyder
PORT ROYAL, PA- Mark it down on your calendars as the 2021 Bob Weikert Memorial race weekend over the Memorial Day holiday on May 29th & May 30th will again be “bigger and better than ever” at the Port Royal Speedway.
Featuring the FloRacing All Star Circuit of Champions presented by Mobil 1 and sponsored by Folkens Brothers Trucking and Packer’s Concessions, the annual red, white and blue spectacular will pay $10,000 to win and $700 to start for the first night, followed by a race-record $29,000 to win and $1000 to start on Saturday. This is an increase of $19,000 from last year’s winner’s share, with the 29 representing the famed Weikert No. 29 Bob fielded for so many years.
Along with the $54,000 to win 54th annual Tuscarora 50, the Speedway plays host to the two largest paying events on the 2021 ASCoC schedule with the added money for the night two Weikert finale.
Night one of the Weikert Memorial will feature the Penns Valley Meat Market PA Sprint Series 305 Sprint Cars on the card, while the Wingless Sportsman will tag along for the first time for the night two finale.
The annual event has been held since 2003 and is a Memorial Day weekend staple that honors the legendary car owner and National Sprint Car Hall of Famer, Bob Weikert. Last year’s event was moved to mid-July as a result of Covid-19. The event first became a two-day spectacle in 2016 and the coveted ‘Steer Head’ trophy is one of the most sought-after trophies for drivers. Last year served as a return to the event for the All Stars after most recently sanctioning it in 2015 and the purse increase only guarantees that the race will remain a premier event in the area.
Last year Kyle Larson swept the weekend to earn the overall championship and the trophies. Fred Rahmer (2), Todd Shaffer, Lance Dewease, Greg Hodnett (6), Jeff Shepard, Stevie Smith, Doug Esh, Cody Darrah, Lucas Wolfe (2), Danny Dietrich and Logan Wagner have all earned victories in the event.
Rookie of the Year contender Tyler Courtney enters the weekend tilt as the series points leader with a 44-point advantage over second-place Justin Peck. Peck scored a victory at Port Royal earlier in the season already and has two with the tour. Ian Madsen (-80), Hunter Schuerenberg (-90) and Zeb Wise (-94) complete the top-five.
Meanwhile in Weikert’s Livestock 410 Sprint Car competition it’s still Logan Wagner leading the way with a commanding 155-point advantage over second-place Dylan Cisney. Mike Wagner is the most recent winner at the Speedway and he sits third (-205) followed by Jeff Halligan (-270) and Anthony Macri (-395).
MRN Radio’s Winged Nation will also be broadcasting live each night at 5pm EST until 6pm at the Stage behind the Grandstands. Fans at the Speedway can watch as their favorite drivers and personalities are interviewed by personalities' Steve Post and Ashley Stremme and those at home can tune in on the Winged Nation and FloRacing Facebook pages or listen at www.WingedNation.com.
Blake’s Hard Cider and Cap Henry Racing will be on hand in that area as well providing samples of their adult beverages along with merchandise and more for fans wishing to partake.
There will be several giveaways for fans arriving for the weekend festivities including hats, shirts, sweatshirts, blankets and koozies. There will also be several kids 12 and under prize packages available for the weekend.
The annual tailgate contest will occur in the parking lot on Sunday at 1pm and first-place will receive a special prize package. Members of the promotional team along with the folks from Winged Nation will be around to help judge the campsites with the 2021 Port Royal pace truck.
Camping is available for $30 for both nights and reserved spots are on a first come-first serve basis. For more information regarding camping please call the Speedway office. Grounds will open for camper arriving at Noon on Friday and all campers must be off the property by Noon the following day on Monday.
Fans will also be able to participate in the 3rd Annual Weikert’s Livestock bring your own partner Cornhole Classic on Sunday starting at 11am. Registration for the team event will start at 9:30am and end at 10:45 in the speedway commercial building. It will be double elimination and cost is $40/team. The event is BYOB- Meaning Bring Your Own Beverages and Bring Your own Bags. House Bags can be supplied and bags are not to include corn. Winners will receive a guaranteed $400 with payouts included to the top 3 finishing teams. This could change depending on sponsors and fan participation.
Should both Saturday and Sunday be cancelled due to rain, a Monday rain date will be utilized with the starting time TBA.
For all the latest news and information, be sure to visit www.portroyalspeedway.com and stay connected via Twitter@portroyalspdway and facebook @ portroyalspeedway.
Saturday, May 29              Weikert Memorial Fallen Heroes Championships All Star 410 Sprints (tt) $10,000 & PASS 305 Sprints
Gates- 4:00pm, Racing- 7:00pm
GA- $25, Students- $10, Pits- $35
Sunday, May 30                 Weikert Memorial Finale All Star 410 Sprints $29,000 (tt) & Wingless Super Sportsman
Gates- 4:00pm, Racing 7:00pm
GA- $30, Students- $15, Pits- $40
Posted by Bill McIntyre at Tuesday, May 25, 2021