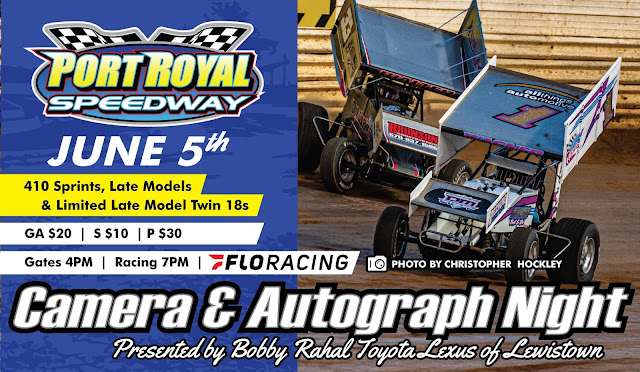 As customary, it’ll be the Weikert’s Livestock 410 Sprint Cars joined by the River Valley Builders Super Late Models. Also, on the card will be a special “Twin 18’s” event for the Selinsgrove Ford Limited Late Model division.

For fans wishing to participate in Camera & Autograph Night, the pits will be open free of charge to all fans with a general admission wrist band from 5-5:45pm.

In Weikert’s Livestock 410 action, Lance Dewease was the most recent winner in the division as he knocked off the FloRacing All Star Circuit of Champions presented by Mobil 1 for a $29,000 payday. Dewease held off Logan Wagner, Tyler Courtney, Danny Dietrich and Mike Wagner for his 118th career triumph at the Juniata County oval.

Logan Wagner enters the weekend on top of the series standings with a 220-point advantage over second place Dylan Cisney in search of his fourth consecutive track championship. The elder Wagner, Mike, sits in third (-225) followed by Jeff Halligan (-340) and Anthon Macri (-500).

This weekend marks a return to the Speed Palace for the Super Late Models following a week absence. The World of Outlaws Dirt Late Model series were in town the last time they raced and it was Chris Madden sweeping the weekend and the $25,000 that came with it.

Delaware native Ross Robinson sits atop the series standings with a mere 5-point advantage over Dylan Yoder. Gary Stuhler (-65), Tyler Bare (-130) and Colton Flinner (-165) round out the top five. There have been seven different winners in the division in nine races this season, with none of them coming from the top-five drivers in the series standings.

This will be a unique event for the Limited Late Models as they participate in a regular handicapped show featuring a pair of 18-lap features. The winner of the first feature will draw either a 6, 8 or 10 to invert the lineup for the second 18-lap feature.

Devin Hart was the most recent feature winner at the Speedway and he has three total victories in the 2021 season along with a commanding 125-point lead in the series standings over Andrew Yoder. Derick Garman (-125), Shawn Shoemaker (-140) and Bob Dunn (-305) round out the top five.

For those unable to attend, racing will be available for viewing via FloRacing and more information can be found at www.florracing.com