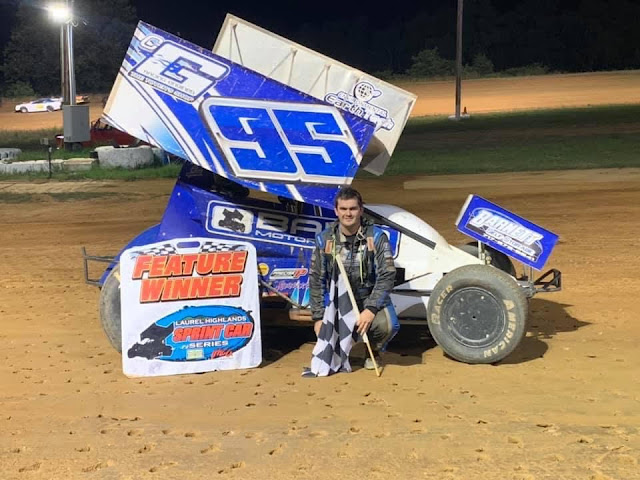 Mill Hall – The Clinton County Speedway kicked off the Fourth of July weekend with a Sprint Car double header.  Garrett Bard of Wells Tannery and Ken Duke Jr of Selinsgrove each claimed a victory over a stellar field of RaceSaver sprint cars.  AY Schilling of Linden won the Pro Stock feature while Timmy Bittner of Beech Creek scored a pair of victories, claiming the 270 and 600 Micro Sprint feature events.
The first sprint car feature had Garrett Bard and Josh Beamer on the front row of the 25 lap main event.   Bard jumped to the early lead with Beamer, Dale Schweikart, John Walp and Dustin Prettyleaf in pursuit.   With a full field of racecars, Bard and company quickly caught the back of the pack by the fourth circuit and began working their way through lapped traffic.   On lap number six, Beamer was closing in on Bard and while trying to keep pace with Bard through lapped traffic, he attempted to put a slide job on a lapped car, but the two cars tangled causing Andrew Boyer’s car to flip in turn number two.   Beamer suffered a flat tire and had to go to the pits.
Bard, Walp, Schweikart, Prettyleaf and Jared Zionkowski were the top five, as the green flag waved for the restart.   Again, Bard was strong on the restart and quickly caught the rear of the field by the completion of lap number ten.  Zionkowski, who started twelfth, was the driver on the move and utilized the top side of the speedway to maneuver through the lapped traffic.  A late race caution occurred on lap number 17, when Jeffrey Weaver spun in turn number four.   Bard was flawless on this restart and was able to hold off the challenges of Walp for the win.   Zionkowski finished third, Schweikart was fourth and Ryan Lynn completed the top five.  Sixth through tenth were Dustin Prettyleaf, Devin Brenam, Andrew Jacobus, Scott Lutz, and Ken Duke. 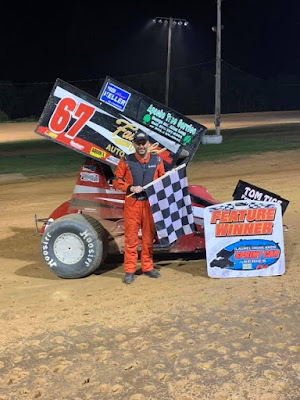