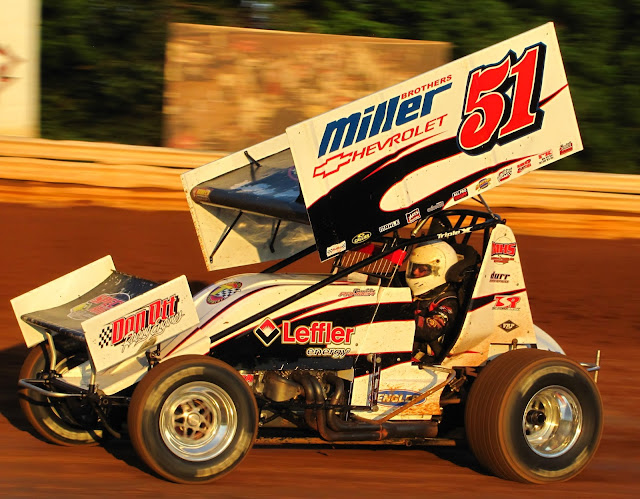 Mechanicsburg – Freddie Rahmer scored his first ever Williams Grove Speedway sprint car win on Friday night, racing ahead of Alan Krimes and Greg Hodnett to the win as he etched another Rahmer name on the historic oval’s all time win list.

In the $4,000 to win, 25-lap URC/ESS 360 sprint car nationals, Greg Hodnett wired the field from the pole for the victory to record a hat track in 360 action at the track to date this season.

Matt Campbell took the lead from the pole at the start of the 410-sprint car main followed by Steve Buckwalter and Rahmer, who started sixth.

Rahmer wasted very little time putting himself into contention, blasting by Buckwalter for second on the second tour only to see Buckwalter reclaim the spot.

Rahmer finally completed the pass on the fifth circuit with a low side move in the third corner and Campbell and Rahmer entered the backmarkers on the eighth lap.

Campbell held a good lead and ran a good line while blasting around the top of the speedway and forced Rahmer to track him down in order to get his shot at the victory.

With 12 laps to go, the Salfordville 20-year old pilot was poised to begin challenging for the top spot and after three laps of trying Rahmer again blasted low into the third turn, underneath Campbell this time, to take control.

However at the same time as Rahmer was going out front, tenth starter Greg Hodnett was motoring into the top spots as well along with Alan Krimes.

Hodnett took second on the 17th tour and was chasing Rahmer through heavy traffic, trying to take the win away.

But strong, deliberate moves by Rahmer in traffic kept him comfortably ahead of Hodnett and then just when he appeared home free, a caution flag with two laps to go slowed the pace, now finding Krimes in second for the restart.

Rahmer would drive uncontested over the final mile of competition to take the payday by .953 seconds over Krimes, Hodnett, Campbell and Buckwalter.

Heats went to Wolfe, Hodnett and Doug Esh with the consolation going to Brandon Rahmer.

The initial start of the 410 sprint main was red flagged when Lancaster’s Doug Esh flipped on the frontstretch after starting eighth.

Hodnett would cruise to victory in the 25-lap URC/ESS 360 sprint main, finding his pace slowed only twice but both times he was able to pull away with the lead.

Aaron Ott got by Davie Franek for second on the third tour and tried to chase Hodnett but keeping him in sight was a challenge.

Ott instead was challenged on a lap 12 restart by New York’s Chuck Hebing, who bolted to his outside in the first and second turns to take over the second position.

But Hebing too was unable to keep pace with Hodnett although on just one occasion Hodnett did get held up in traffic for a few laps to allow Hebing to close the gap slightly.

However Hodnett still picked up the win, his third this season at the track in 360 sprint action, by 3.174 seconds over Hebing followed by Ott, Robbie Stillwaggon and Franek.

Heats for the 34 cars in action went to Hodnett, Franek, Adam Carberry and Ott with the consolation going to Jordan Thomas.