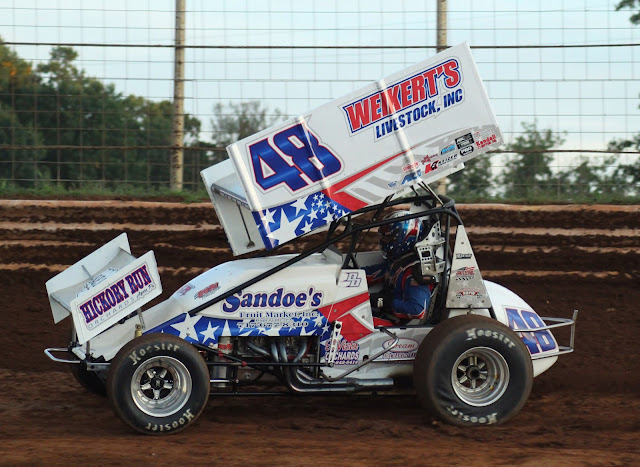 Mechanicsburg – Danny Dietrich came out on top of a furious battle with Matt Campbell during the last few laps to pick up the victory in Friday night’s season ending sprint car main at Williams Grove Speedway.

And in the super late model main Bryan Bernheisel took the win over his father Jim Bernheisel to close out the season’s competition.

Trying to pick up his second win in under a month, Matt Campbell started on the pole of the 25-lap 410 sprint main and blasted into the lead over Dietrich when action began.

Campbell entered the rear of the field on just the fifth tour with Dietrich in tow however the Fawn Grove driver performed flawlessly in traffic to keep Dietrich at bay despite some intense battles as he worked through the back of the pack.

At the halfway point, Campbell was doing everything right to keep his lead over Dietrich with nearly a one second advantage.

With 10 laps to go, Campbell was still flawless, working both sides of the speedway as Dietrich and Brock Zearfoss kept pace although not able to make any bids for the win.

But with three laps to go, the races only caution flag unfurled, clearing the way for Campbell but also placing the second and third place cars directly on his tail.

And when action resumed for the final three laps, Dietrich went to work wrestling with Campbell for the win and during the final mile and a half, the pair swapped the lead no less than seven times as they see-sawed back and forth in every corner.

Campbell had a car that worked perfectly on both sides fo the track and if Dietirch went for the slider, Campbell simply backed off, turned the car and jetted back into the lead after dropping off of the cushion.

But Dietrich finally got the better of Campbell in the final turns, having beaten him into the third corner for the victory, which was his third of the year at the track.

Campbell then slipped just a bit in the final corner, allowing a close following Zearfoss to get by for second.

Dietrich’s margin of victory was .547 seconds over Zearfoss.

His pace was hampered by numerous caution flags including on the initial start and on laps seven, 10, 16 and 22.

But each time the field restarted the younger Bernheisel was able to pull away from the rest of the field.

Coleby Frye took second from Jim Bernheisel on the lap seven restart but Frye then withdrew from the race with 10 laps completed.

The win was the second of Bryan Bernheisel’s career at the Williams Grove oval.